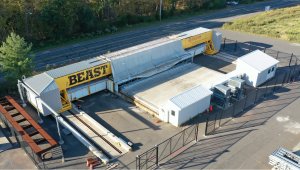 CAIT’s BEAST Lab has been testing a full-scale, 50-ft. bridge deck for a project sponsored by the FHWA to learn about how the bridge deteriorates under exposure to extreme environmental conditions and traffic loading — and to evaluate emerging bridge preservation technologies such as UHPC.

In FHWA’s April EDC Newsletter, it featured this project as its “EDC Innovation of the Month” for UHPC Bridge Preservation & Repair Research.

CAIT’s Bridge Evaluation and Accelerated Structural Testing lab (The BEAST) is a unique facility that can quantitatively measure the effects caused by intense traffic and environmental extremes on actual bridge decks and superstructures—and do so in a highly compressed time frame. It is built to induce and speed up deterioration as much as 30 times, making it possible to simulate decades of wear-and-tear in a matter of months.

The lab allows CAIT to help provide asset managers with empirical evidence that supports and enhances a bridge owners’ decision-making. Engineers will be able to fast-forward, observe, and quantify the complex interrelationship of the environment and traffic with bridge designs, construction materials, and elements, and extrapolate how those things can be expected to perform decades from now.

Read the article below to learn about innovative testing being done at The BEAST to support bridge preservation and the durability of transportation infrastructure in the region.

Wouldn’t it be great to quickly test the performance of a UHPC bridge deck overlay? It can be challenging to test and evaluate the long-term performance of new bridge preservation innovations because it would normally take years of monitoring the in-service behavior of such a technology on actual bridge structures to make an adequate assessment.

Built in 2015, the BEAST facility aims to develop high-quality data of bridge deterioration and to expand our knowledge of bridge performance through full-scale accelerated testing. The facility is capable of enclosing a 50-foot long bridge within an environmental chamber and subjecting the bridge to realistic rolling wheel loads, freeze-thaw cycles, and even the application of deicing chemicals. As a result, this facility can impose 10 to 20 years of ageing in less than 12 months.

FHWA is sponsoring the first project to utilize the BEAST® facility, and seeks to establish the long-term performance of bare reinforced concrete bridge decks and overlay systems among other variables. A two lane, 50 foot simply-supported bridge built with steel girders was constructed and began accelerated testing in 2019. To date, it’s been subjected to over 2-million passes of rolling load, 85 freeze-thaw cycles, and over 3000 gallons of salt brine. As a result, deck deterioration has reached a point where, in practice, an overlay would commonly be installed for rehabilitation and preservation purposes.

UHPC is one of the overlay systems that will be installed on this bridge specimen for evaluation. The UHPC overlay will be installed using materials and construction practices that are commonly deployed in the field. Once installed, accelerated testing will resume for at least 12 months, or until significant deterioration is again observed.

Data will be collected, which will help establish quantitative measure of the overlays’ ability to perform long-term and under realistic conditions. Data already shows that UHPC is long-lasting and resilient, but at the end of this research, researchers will be able to say with greater confidence how long UHPC overlays may last in service.