The Associate Director of CAIT, Dr. Patrick Szary, has served on the executive committee of CUTC previously as well as playing an instrumental role in both leading CAIT’s research in aligning with the national vision of USDOT while also engaging regional stakeholders and developing the Center as a dynamic resource in the NJ/NJ area. 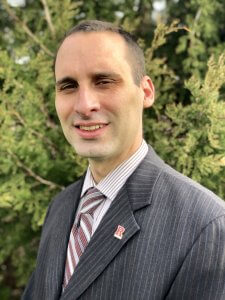 Dr. Patrick Szary, Associate Director of CAIT, has served on the executive committee of CUTC previously as well playing an instrumental role in leading the Center. Photo ©Dr. Patrick Szary.

At its summer meeting this June, the Council of University Transportation Centers (CUTC) elected members to its executive committee for 2020-2021—including CAIT Associate Director Dr. Patrick Szary as its new secretary.

As part of the executive committee, Dr. Szary and fellow members will have the challenge of leading and steering CUTC through these unprecedented times while maintaining the national agenda. In previous roles, Dr. Szary also served on the CUTC Executive Committee from 2014-2017 and before that was selected for the CUTC-ARTBA Administrative Leadership Award.

“I look forward to joining the CUTC executive committee again this year and helping the Council continue to grow and develop as its secretary,” he said. “Promoting university research and technology transfer, and collaborating with each other, is as important now as ever to maintaining and improving the nation’s transportation system. We are living through something that hasn’t happened in our lifetimes and 2020 marks a significant shift in the way we live, work, travel, and commute. I’m very familiar with CUTC and have been an active participant for nearly 20 years, by returning to the executive committee I hope to give back to the transportation community and help bring stability during the COVID-19 pandemic.”

As associate director of the Rutgers Center for Advanced Infrastructure and Transportation (CAIT), Dr. Szary has been integral to the Center’s success since its inception as a USDOT University Transportation Center in 1998—as well as helping it grow into the current Region 2 UTC focused on the “Durability and Extending the Life of Transportation Infrastructure.”

He has also generated more than $30 million in funding for CAIT’s UTC program and has published more than 50 research reports and journal articles. He has worked to align CAIT’s research to meet national visions as well as regional needs such as better pavement, new technologies such as UAS, and more, through his leadership and engagement with stakeholders and decision makers in the transportation industry.