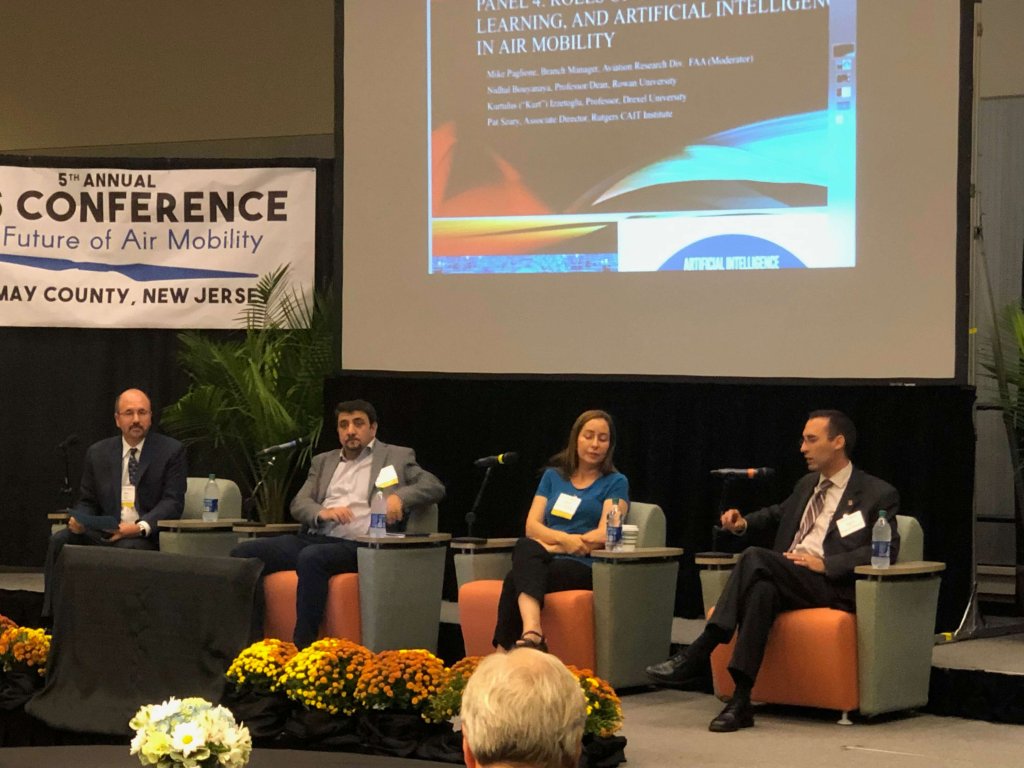 The three-day event featured panelists from NASA, FAA, universities, industry, and more including associate director of Rutgers CAIT Dr. Pat Szary, who presented on the safety and security roles that AI might play in the future of air mobility. A major theme of the event was addressing next steps in further implementing UAS technology into everyday life.

The drone industry continues to grow rapidly, but before UAS technology can be further implemented into day-to-day life there are a number of questions that need to be answered and roadblocks that need to be navigated.

Some of those matters were addressed at the end of September at Cape May County’s Fifth Annual Unmanned Aircraft Systems (UAS) Conference that brought in experts from across the industry to showcase projects, discuss latest research, and think about the most pressing challenges in air transportation.

Over three days, from Sunday, September 22 to Tuesday, September 24, experts gave their takes on air mobility through a series of panels. On Monday, associate director of Rutgers CAIT, Dr. Pat Szary, joined professors from Drexel and Rowan University for a panel on the roles of big data, machine learning, and Artificial Intelligence (AI) in air mobility. The panel was moderated by Mike Paglione, Federal Aviation Administration (FAA) research branch manager. 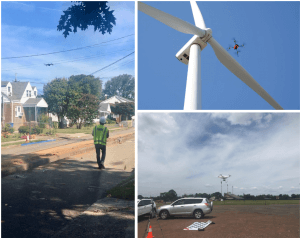 Drones and UAS technology have a lot of unique applications. Researchers at Rutgers CAIT and partner universities have been used drones for some recent projects. Photo ©Ryan Stiesi and ACCC.

It began by defining deep learning, machine learning, and AI, as well as analyzing the current state of AI and potential for future uses. Notably, travel and transportation and logistics were among the top two industries that could be improved by AI as compared to other analytics techniques according to a recent report. But, there are some challenges to reaching that point, namely in the areas of low-power computing, technology readiness, trust, safety, and security.

Dr. Szary said that aviation is statistically safer than surface transportation. But, an increase in UAS and air travel could change this. In order to ensure safety, he said AI could be critical to help keep aircraft and aerial transportation at a low risk.

For example, in 2017 The Bureau of Transportation Statistics (BTS) estimated that 37,133 people died from fatal highway motor vehicle crashes in the U.S. Part of the reason why is the millions of vehicles and drivers that are on the road every day compounded by the fact that humans are subject to distraction and impairment.

To reduce road fatality and injury numbers, Dr. Szary said AI and connected vehicles are being looked at as a future solution. It could potentially remove impaired driving due, not only to drinking and drugs, but drowsiness, distracted driving in a society where smart phones and information are at our fingertips, and other “human errors” too. But, that technology is still a long way out.

On the other hand, air transportation has an extremely low number of fatalities and injuries each year. If air mobility and transportation grows exponentially, then it could bring with it potential safety issues due to thousands of new air-delivery drones and air taxis being added to an already congested National Air Space (NAS). Not only that, but thousands of human pilots prone to error, distraction, speeding, and more would also be added to the equation.

Currently, pilots make decisions based on their comfort level and training to fly in poor weather or instrument-only conditions. Removing the human element means that the aircraft’s technical limitations and not a pilot’s judgment would then be in control, Dr. Szary said. In both cases, AI technology will certainly need to advance to certain levels in order to make these new modes of transportation safe and secure.

“We have nearly 300 million registered vehicles (cars/trucks) in the US, can you imagine if drones suddenly took the place of delivery companies and air taxis scaled up too,” he asked. “Would we be bringing all those inherent surface-transportation issues that we’ve been tackling with campaigns like ‘Towards Zero Deaths’ to the NAS? While adopting AI and removing the human element and distracted side of things definitely may assist with safety issues and aviation, it could also potentially open the door to cyber-security issues, hacking issues, reliance issues, and ‘we’re not there yet’ issues.”

Dr. Nidhal Bouaynaya, a professor of Electrical and Computer Engineering and associate dean of Research and Graduate Studies at Rowan University, also spoke during the panel. She brought up the issues of trustworthiness and reliably of modern AI systems. 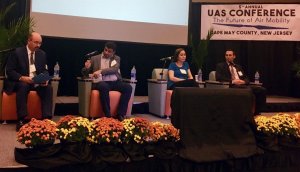 On Monday, Researchers led a panel on the roles of big data, machine learning, and Artificial Intelligence (AI) in air mobility. Photo ©Cape May County Herald.

“AI systems are threatened by adversarial attacks, which limit their applicability in key security fields,” She said. “Despite their recent success, machine learning algorithms are vulnerable to malicious attacks from adversaries that covertly poison the data to fool the AI system into making the wrong prediction or decision.”

Dr. Bouaynaya highlighted the importance of improving the robustness of machine learning algorithms in the further development of AI.

Some other key components the panelists discussed were the “explainability” of AI to the public and end users, the data requirements for AI in air travel, and its interactions with humans including building trust and educating people about interacting with the technology.

In addition to this panel, the Cape May County Herald reported on other happenings at the conference, including different UAS technology companies displaying drones and new projects, a speaker from The National Aeronautics and Space Administration (NASA) discussing the agency’s United Air Mobility (UAM) vision, and more thoughts on potential technology and policy opportunities and challenges for air mobility.