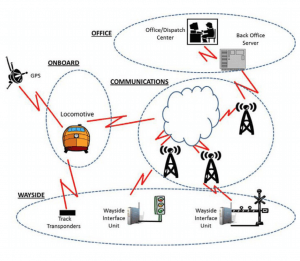 Prior research focusing on end-of-track collision risk management is limited. Part of an ongoing project to study passenger-terminal safety and end-of-track collision prevention strategies, CAIT researchers have published two papers: one analyzing Positive Train Control implementation with a focus on Concept of Operations, and the second providing a cost-benefit analysis.

In the United States there are more than 35 passenger terminals with multiple terminating tracks ending at bumping posts, platforms, or both. At these passenger terminals, it is up to the engineer to safely stop a train before reaching the end of the track, leaving room for human error.

While extensive research has been done on train safety related to derailments, collisions, and other areas, the same cannot be said for end-of-track collisions at passenger terminals. The Rail and Transit Program at the Rutgers Center for Advanced Infrastructure and Transportation (CAIT) has taken an active research role in addressing this.

Researchers have published two papers on the subject so far, supported by grants from the Federal Railroad Administration (FRA).

“There is currently limited research on Positive Train Control (PTC) technology in passenger terminals,” said Dr. Xiang Liu, Rail and Transit Program lead and an assistant professor in Transportation Engineering at Rutgers. “At CAIT we have an extensive combination of expert researchers, experienced engineers, and resources that allow us to take on pressing challenges in the industry such as analyzing PTC for passenger terminals to inform decision-makers on what steps make sense.”

It was published in the Transportation Research Record: Journal of the Transportation Research Board, and found that human error is a primary cause of end-of-track collisions at terminating passenger terminals, and that PTC implementation and enforcement can reduce this risk. It also asked what are the safety statistics of historical end-of-track collisions, what are the causes, and what does the ConOps look like if PTC is enforced.

For each implementation scenario, a ConOps is proposed that provides information on enforcing PTC and implementing it.

In the ACSES-type PTC system, it is proposed that when the train reaches the end of ACSES territory, a set of transponders would inform the onboard system, causing it to go into a dormant state. The ACSES system being deactivated does not enforce any stop or speeds, but the ATC system enforces restricted speed at 20 mph or 15 mph.

Although the maximum authorized speed at terminal tracks can be enforced by the active ATC system, a train moving under that maximum speed could still cause a collision. For example, a train moving at 5 mph can still cause an end-of-track collision that cannot be prevented by the ATC alone, which is where PTC could help.

The I-ETMS system employs GPS navigation to track train movements and real-time location. In practice, many passenger terminals are either underground or surrounded by crowded buildings that make reception of GPS signals difficult.

The proposed ConOps is to map all the terminating tracks to obtain the distance between a point where the train can obtain a good GPS signal and the end of the track. Then, when the I-ETMS system loses GPS signal, the distance that the train has traveled can be continuously measured through counting pulses from wheel sensors, which is known as ‘‘Dead Reckoning.’’

The second paper, titled “Prevention of End-of-Track Collisions in Passenger Terminals via Positive Train Control: A Benefit-Cost Analysis,” develops a benefit-cost analysis (BCA) to identify and evaluate the safety benefits and incremental-implementation costs associated with PTC enforcement on terminating tracks.

This paper was submitted to the American Railway Engineering and Maintenance-of-Way Association (AREMA) 2019 and published in the conference proceedings. Researchers also recently presented on the findings.

It concluded that the proposed PTC implementation yields significant safety benefits that exceed potential incremental-implementation costs. For this study, researchers focused on PTC enforcement only on the platform tracks based on 20 years’ worth of study data.

“It is important that this subject be studied so that if agencies adapt PTC technology on the platform tracks in passenger terminals they have a clear idea of how it works, what its impacts will be, and how to operate and implement it,” Dr. Liu said.

Ongoing research is also underway as part of a third study to investigate the potential operational impact, as well as any potential implementation issues, of these findings through field testing.