Traffic congestion costs the United States billions each year in productivity as commuters find themselves stuck on the nation’s crowded roadways. As more and more people use the transportation system nationally and in the region, investment in innovative, intelligent transportation systems is needed to ensure that current and future infrastructure is able to handle new loads. By working with NJDOT to identify and develop strategies for ATSPM, recent research from Rutgers CAIT addresses one aspect of this growing need.

Traffic congestion ends up costing the nation in terms of both productivity and dollars lost every year. According to The Texas A&M Transportation Institute’s 2019 Urban Mobility Report, the average commuter loses 54 hours a year to traffic delays and the nationwide cost of gridlock is $166 billion a year — $1,010 per commuter.

These delay costs may be even more prevalent in New Jersey and its surrounding region too, as it is one of the most densely-populated states in the nation and home to multiple heavy-volume freight corridors. For example, The Port Authority of New York & New Jersey announced new passenger records at its airports, seaport, PATH system, Goethals Bridge, and Staten Island bridges in 2019 in a recent press release.

Notably, the three Staten Island Bridges – the Goethals and Bayonne bridges and the Outerbridge Crossing – collectively set a new traffic record in 2019, handling 36.1 million eastbound vehicles, a 4 percent increase over the previous annual record set in 2018.

“We have taken aggressive steps in the past year to invest in building new, modern facilities and to upgrade existing legacy infrastructure to handle the record passenger and cargo volumes we continue to experience every year,” said Port Authority Chairman Kevin O’Toole in the press release. “From the new LaGuardia Airport, to the new Terminal One at Newark Liberty, to the redeveloped JFK Airport, we intend to make an unprecedented level of investment in our infrastructure to create a network of state-of-the-art facilities that provide an unparalleled level of customer experience.” 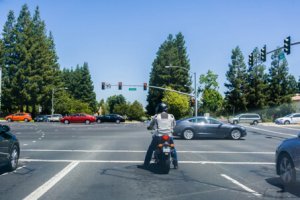 The average commuter loses 54 hours a year to traffic delays, and the nationwide cost of gridlock is $166 billion a year — $1,010 per commuter.

Dr. Peter Jin, an assistant professor at the Rutgers Department of Civil and Environmental Engineering (CEE) and an affiliated member of the Center for Advanced Infrastructure and Transportation (CAIT), recently led an ITS project working with the New Jersey Department of Transportation (NJDOT) to identify and develop metrics, guidelines, and deployment strategies necessary to conduct real-time monitoring of traffic signal performance based on existing and planned infrastructure resources and NJDOT needs.

According to the Federal Highway Administration (FHWA), there are more than 330,000 traffic signals operating in the United States. Agencies typically retime these signals every 3-5 years on an ad-hoc basis due to limited data and information.

This can compromise safety and efficiency and contributes to congestion and increased maintenance costs. Each intersection costs approximately $4,500 to be updated, according to FHWA. This adds up to expensive maintenance costs and a lot of unhappy citizens.

ATSPMs add high-resolution data-logging capabilities to existing infrastructure and analysis techniques, Dr. Jin said. With these capabilities professionals can more efficiently identify and solve problems, allowing them to be proactive in supporting an agency’s goals of safety, livability, and mobility.

The technology is cost effective, as it can be applied to a wide range of signalized intersections and use existing infrastructure. ATSPMs also support the validation of other technologies and operational strategies, such as adaptive signal control and emerging connected vehicle applications.

For his research, Dr. Jin’s goal was to use existing field data, equipment, and a centralized arterial management platform to establish ATSPM for real-time monitoring. One drawback of the existing ATSPM system is its requirement of using high-resolution controllers that are not available in legacy signal control systems. In the research, the team developed a modified ATSPM system that can take signal event and detector data directly through Adaptive Traffic Signal Control (ATSC) systems already reporting data to arterial management centers. This method significantly reduced the cost of deploying ATSPM on existing arterial systems without the costly upgrading to high-resolution controllers.

“ATSPM has many advantages over the traditional traffic signal monitoring and management process,” Dr. Jin said. “For this project it was important to take into account existing, forthcoming and planned infrastructure. As the state continues to invest in adaptive signal controls and smart technology, ATSPM and other innovations will help lay the groundwork to accommodate the next generation of technology and transportation.”