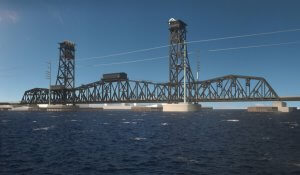 The existing bridge, known as River Draw, was damaged during Superstorm Sandy in 2012, and required emergency repair before being put back in service, NJ Transit officials said in a press release. Now, the NJ Transit Board of Directors have approved a contract with George Harms Construction of Farmingdale, NJ for the initial construction phase of the Raritan River Bridge Replacement project.

The approximately $250 million contract is part of NJ TRANSIT’s Resilience Program initiated following Hurricane Sandy to make its transit systems and infrastructure stronger and more reliable for its customers. During construction, NJ Transit will keep the existing bridge in service to ensure minimal service disruption, officials said in the press release.

“We continue to make strategic resiliency investments in our infrastructure to ensure the long-term viability of the transportation system,’’ said NJ Transit President & CEO Kevin Corbett in the press release. “The Raritan River Bridge replacement contract awarded today is a great step forward in ensuring our North Jersey Coast Line customers have robust and sustainable rail service that will better withstand the effects of extreme weather, while meeting the current and future transportation needs of our customers for so many decades to come.’’

A study led by Research Assistant Professor at the Center for Advanced Infrastructure and Transportation (CAIT) Dr. Yun Bai, alongside industry partner Econsult Solutions, Inc., helped to provide an analysis of the economic impacts associated with the project.

“Major construction projects like these provide not only resilience and safety benefits, but economic benefits too,” she said. “This research analyzed the potential effect of the upfront construction and ongoing operations of the new infrastructure on the state’s economy, to provide NJ Transit with another tool when analyzing this project.”

According to the study, the research team found that the one‐time total economic impact of the Raritan River Bridge Replacement project for the New Jersey economy will be $1.0 billion including the direct, indirect and induced economic impacts, supporting 5,740 jobs and $352.5 million in earnings.

The Raritan River Bridge Replacement project advances following a Federal Transit Administration (FTA) grant award through FTA’s Emergency Relief Program for resilience projects in response to Superstorm Sandy, officials said in the press release. FTA funding for this project totals $446,312,465, of which $247,945,055.49 is allocated to this contract award. The total project cost for all three phases is estimated at $595 million.

Built in 1908, River Draw is the sole rail link for 17 of the 20 stations on the North Jersey Coast Line between popular Jersey Shore recreation destinations and the major employment centers of Newark, Jersey City, and Manhattan, according to the press release. The NJCL provides service to approximately 11,400 daily customers making approximately 22,800 Average Weekday Passenger Trips and accommodates Conrail freight rail services.

“NJ Transit’s River Draw replacement involves significant upfront investment in new infrastructure, and after the construction will also have ongoing economic impacts through its operations and maintenance,” Dr. Bai said. “Understanding these impacts is vital to transportation and infrastructure projects, and CAIT was excited to be a part of the economic impact study.”