Inaccurate network pavement data can impact pavement management decisions such as roadway repairs and more. CAIT researchers at the Rutgers Asphalt Pavement Lab are working with NJDOT to test new pavement inspection equipment and locations to ensure data is accurate and representative of roads in New Jersey.

Traffic volume, climate, age and more can all contribute to changes in pavement performance over time — making it important for state and federal agencies to test and monitor pavement condition on roadways, bridges, and other vital pieces of transportation infrastructure.

One of these indicators that agencies measure is pavement smoothness. The Federal Highway Administration (FHWA) requires that states submit annual pavement network reports for its Highway Performance Monitoring System (HPMS). In these reports agencies summarize their state’s network International Roughness Index (IRI), which is determined based on vehicle responses to changes in pavement elevation over a specific distance and can provide indicators about the condition, quality, and safety of roadway pavements.

Since pavement smoothness testing is highly dependent on testing speed, vehicle congestion, traffic lights, and restricted speed limits that are common to NJ highways, many locations in the state pose obstacles for agencies when it comes to testing pavement smoothness and can potentially cause outliers in the collected IRI data. 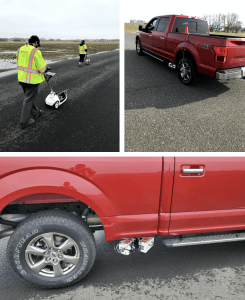 That is where researchers at the Center for Advanced Infrastructure and Transportation (CAIT) and Rutgers Asphalt Pavement Lab, Michael Boxer, project engineer; and John Hencken, engineering researcher; come into play.

As part of the Rutgers Asphalt Pavement Lab that recently won the New Jersey Department of Transportation’s (NJDOT) 5-year Pavement Support Program, the researchers said they are working as a solution provider for NJDOT for various tasks under the grant — one of which is verifying the equipment and site locations used by the state to collect and analyze network pavement conditions.

“Inaccurate measurements in the collected network pavement data can create significant issues when it comes time to report the data and then apply it to pavement-maintenance decisions,” Boxer said. “Ensuring that our equipment aligns with the state-of-the-art in the field and optimizing our testing locations are critical to gathering accurate data.”

The Pavement Lab team has been conducting this smoothness testing with NJDOT and currently operates at an old rest stop along Interstate 295 in NJ. Researchers said they visit the site monthly with a SurPRO walking profiler and walk the wheel paths to create a reference point for other vehicles to be tested against.

The testing is done with the goal of verifying the NJDOT’s pavement profiling equipment, while also ensuring that consultants have properly calibrated equipment. So, during each test period CAIT researchers analyze a variety of equipment and vehicles ranging from walking profilers to NJDOT vans and other trucks.

For most devices, vehicle stops and starts, or operator movement, can be a problem and add noise to the data being collected. But the zero-speed profiling technology can potentially eliminate that issue and allow for data to be collected during these stops and starts.

This technology could also be beneficial because walking profilers can be cumbersome and slow to use, and more prone to potential operator errors such as swaying or walking too quickly.

The system came with a manufacturer-recommended vehicle and is mounted with multiple accelerometers, offset line lasers, precise location system, and more to help measure changes in the roadway and smoothness. Like other devices, researchers are currently testing it to see how it compares to reference measurements being collected.

Researchers are now reviewing data from the Zero Speed Profiler to see how it compares to current best practices, and plan on continuing to investigate potential new technologies going forward.

“We hope to establish a comparison between the conventional methods we have been using and this new technology and learn more about how the use of this new equipment could impact the pavement smoothness measurements and accuracy of network data collection,” Boxer said.

CAIT researchers are also looking at potential new sites for NJDOT to do its pavement testing.

When the Interstate 295 rest stop site was first established for inspection purposes, it was initially designed for walking speed testing. It was repaved and set up to simulate different types of roadways in the state. This includes a smooth lane made as “by the books” as possible and a second lane with built-in roadway mistakes and imperfections. Four different wheel paths are then set up between the two lanes encompassing a range of smoothness from 45 to 195 inches per mile.

“The lower the number the smoother the pavement is, and brand new NJDOT pavements typically come in at 50-70 inches per mile,” Hencken said. “If a reading comes back on a new pavement that is 170 inches per mile or higher that typically means it has to be removed and replaced.”

But researchers explained that curves along the short test-site can make it difficult to get up to and maintain test-speed when using higher-speed measurement devices. A longer/straighter test site would help equipment drivers and operators collect viable measurements, while new technology such as the Zero-Speed has the ability to remove the speed component completely.

So, in addition to investigating new pavement profiling technologies, another task that CAIT researchers have had during this past year is to test additional sites for evaluating pavement condition in the state — or find ways to optimize the current location moving forward.

“Helping NJDOT investigate new testing sites and new equipment can go a long way in ensuring that future pavement management decisions are made based on the most accurate data collected in the field,” they said.