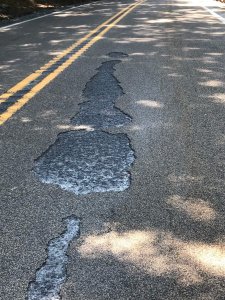 According to data from the National Highway Traffic Safety Administration (NHTSA), in 2015 there were 6.3 million vehicle crashes nationwide, resulting in more than 35 thousand fatalities. Of those fatalities, more than half were as a result of roadway departure crashes.

In New Jersey specifically, statistics show that in 2016 there were 336 fatalities and 517 serious injuries as a result of lane departure crashes.

“Poor pavement conditions are a major contributor to lane departure crashes as they decrease friction on the roadway and can make it harder for drivers to stay in their lanes,” said Dr. Thomas Bennert, director of the Rutgers Asphalt Pavement Laboratory and an affiliated researcher at the Center for Advanced Infrastructure and Transportation (CAIT). “This safety issue becomes amplified when elements such as inclement weather make pavement wet or at higher-risk areas on a roadway such as horizontal curves, merge locations, and intersections.”

In recent years High Friction Surface Treatments (HFST) have grown in popularity as a potential solution to this problem through its ability to help improve friction on roadways — reducing lane-departures as a result and helping to decrease the likelihood of related vehicle crashes.

In fact, HFST is now known as one of the Federal Highway Administration’s (FHWA) nine proven countermeasures to reduce roadway departure crashes, and the technology has been deployed in approximately 75% of states nationwide. HFST is also an FHWA Every Day Counts Round 2 initiative and Every Day Counts Round 5 Reducing Rural Roadway Departure initiative safety countermeasure.

“Traditionally, HFST has involved the application of high-quality aggregate, most often calcined bauxite, to an existing roadway surface using an epoxy-resin material to help improve the pavement surface’s frictional characteristics in locations that are of high risk for lane departures,” Dr. Bennert said.

But, there are potential issues with this type of treatment as factors such as performance and service life often depend on the quality of the construction process, material being used for the treatment, and current condition of the pavement. That is where a new study led by Dr. Bennert, in partnership with the New Jersey Department of Transportation (NJDOT), comes into play.

The research project,” Development of High Friction Surface Treatment Prescreening Protocols and an Alternative Friction Application,” analyzed three HFST installations in New Jersey, one of which was performing well while the others showed signs of premature failure, and then summarized the results. From the data they gathered, researchers were then able to develop prescreening protocols and testing procedures to help asset managers and decision makers analyze existing asphalt pavement surfaces and determine whether or not epoxy-resin HFST makes sense for their specific needs.

“There are many different characteristics that can impact friction on a roadway, ranging from micro & macro texture properties of the pavement surface, existing pavement conditions, and roadway geometry and speed limitations,” Dr. Bennert said. “This research allowed us to develop prescreening procedures to determine whether or not the epoxy-resin HFST should or should not be placed on existing asphalt pavement surfaces.” 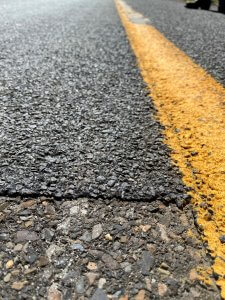 In the cases where the epoxy-resin HFST was not a suitable candidate, the researchers also looked at potential alternatives to epoxy-resin based HFST, specifically High Friction Chip Seal (HFCS) and Enhanced Friction Overlays (EFO).

HFCS is an alternative to HFST and is also bonded to roadway surfaces with the goal of increasing friction, Dr. Bennert said. But, HFCS uses a highly, modified asphalt binder as the bonding agent that is more compatible with asphalt pavement that either show signs of aging and/or have a lower tensile strength.

“There is an inherit incompatibility between asphalt materials and the epoxy-resin with respect to their expansion/contraction properties,” he said.  “Due to this, asphalt pavements having particular properties will not be able to withstand these movements due to temperature cycling, resulting in shallow delamination and edge cracking of the HFST application.”

Researchers evaluated three different HFCS test sections along Route 68 in New Jersey, ultimately finding that the HFCS provided exceptional frictional performance and was also very cost effective when compared to the traditional epoxy-resin HFST.  This alternative to HFST could have potential application on roadways and in specific locations where premature HFST failure has a high potential.

“More research still needs to be done, but this project allowed us to collect important data about the performance and service life of epoxy-resin HFST under New Jersey climate and traffic conditions, as well as potential alternatives that can help us make more informed decisions about our roadways and safety going forward,” Dr. Bennert said.