Self-driving shuttles are one part of NJ Transit’s future plans for filling in the gap on first and last-mile transit options. The agency hopes to test this technology as part of an innovative pilot program that Rutgers CAIT has partnered with them on. 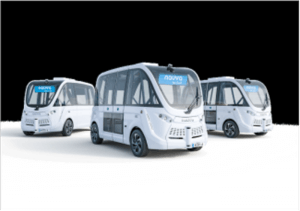 NJ Transit submitted a proposal to the FTA for a grant to test three self-driving shuttles as part of the pilot program. Photo © NJ.com.

Autonomous vehicles are the transportation mode of the future, and New Jersey Transit is looking at using this innovative technology to provide its customers with new rider options that meet their needs.

NJ Transit recently presented local municipalities and community-based transportation groups with their first glimpse at autonomous, self-driving shuttles at the NJ Council on Special Transportation (COST) Expo in Edison. The agency hopes to test these self-driving shuttles as part of a highly innovative pilot program that fills the gap on first and last-mile transit options.

Rutgers Center for Advanced Infrastructure and Transportation (CAIT) partnered with NJ Transit on the pilot program, as well as the Fort Monmouth Economic Revitalization Authority, according to a recent news release from NJ Transit.

Dr. Xiang Liu, the Lead of the Rail and Transit Program at CAIT and an assistant professor in Transportation Engineering at Rutgers University, said he looks forward to continually working with NJ Transit on this project.

“The U.S. rail and transit industry is heading toward increased connectivity, intelligence, and automation,” Dr. Liu said. “Automation and other ‘smart’ technologies have the potential to improve transportation safety and efficiency across a variety of modes.”

The autonomous shuttles have a 15-passenger capacity, travel at speeds up to 15 miles per hour and are 100% electric, NJ Transit officials said according to the news release. They submitted a proposal to the Federal Transit Administration (FTA) for a grant to test three self-driving shuttles as part of the pilot program that would last several years.

The first phase would be closed-course testing on a 40-acre site on a closed section of Fort Monmouth. Phase two would require obtaining permits to allow the vehicles to drive on public roads and carry passengers within the Fort Monmouth property.

It is also the third largest transit system in the country with 165 rail stations, 62 light rail stations, and more than 18,000 bus stops linking major points in New Jersey, New York, and Philadelphia.

“Autonomous vehicles have the potential to add significant value to our service,” Corbett said according to the news release. “The ‘need’ is also there–especially for NJ Transit customers. Despite low gas prices and declining nationwide rail ridership trends, NJ Transit’s rail ridership went up approximately three percent from fiscal year 2018 to 2019. Our customers are clearly looking for ‘first mile, last mile’ options, and that’s what this pilot program is all about–exploring options for our customers, staying ahead of the curve, and studying the benefits and challenges of this rapidly-advancing technology in real-world scenarios.”

By conducting the pilot program of low-speed autonomous shuttles, NJ Transit will learn what is needed to recommend these types of vehicles to community transportation providers who serve senior citizens, people with disabilities, and other transit-dependent residents.

This program will also enhance the understanding of the community-based transportation providers to potentially use these innovative solutions for their customers who have fewer mobility options and would benefit from additional travel capacity, officials said. The self-driving shuttles can serve small area trips and feed NJ Transit and other fixed-route services, thereby enhancing ridership and customer satisfaction among community and traditional transit.

This winter, the FTA is scheduled to announce recipients of funding on the grant proposals.

“We support NJ Transit in taking on this innovative pilot program,” Dr. Liu said. “Rutgers CAIT is looking forward to assisting the agency in evaluating this autonomous transit technology in New Jersey.”