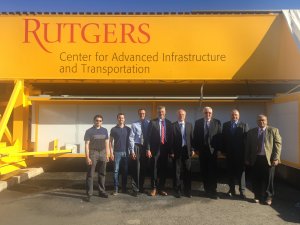 Thomas D Everett, Executive Director of the FHWA, toured The BEAST with members of Rutgers CAIT and the SoE. Photo ©Ryan Stiesi.

Thomas D. Everett has been working at FHWA for decades in multiple leadership roles, but before that he got his engineering start at Rutgers. Earlier this month he was honored for his service and received the prestigious Rutgers Engineering Society Distinguished Engineer Award. He stopped by CAIT for a tour of The BEAST and other facilities too.

This October, Thomas D. Everett, Executive Director of the Federal Highway Administration (FHWA) and an alumnus of the Rutgers School of Engineering (SoE), was honored for his important contributions to the civil engineering field, innovative leadership and vision, and hard work that have distinguished him throughout his career.

He was presented with the Rutgers Engineering Society Distinguished Engineer Award at The 2019 Medal of Excellence Dinner on Thursday, October 10, 2019 at the Palace at Somerset Park, in Somerset, New Jersey. Altogether, SoE recognized the achievements of six alumni in the categories of Medal of Excellence for lifetime achievement, Distinguished Achievement in Industry, and contributions to the space program with the Dean’s Award for Service, among others.

Established in 2006, The Medal of Excellence Awards recognize SoE graduates who have distinguished themselves professionally since graduation in industry, academia, government, research, and business. The awards also recognize alumni who have distinguished themselves in other areas including continued involvement at SoE as well as in social responsibility. 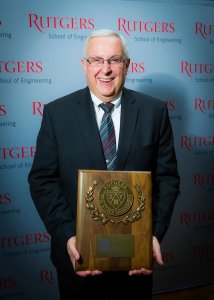 Thomas D. Everett was honored and received his award at The 2019 Medal of Excellence Awards Dinner. Photo ©Roy Groething Images.

In this role he manages the daily operations of the agency and its personnel and advises the administrator, deputy administrator, and senior officials throughout the U.S. Department of Transportation (USDOT) on the agency’s programs and priorities.

He joined FHWA in 1985 as a Highway Engineer Trainee, and has gone on to hold several other leadership positions as well, including the associate administrator of FHWA’s Office of Infrastructure. In this capacity he provided leadership, policy direction, and oversight to guide the administration and implementation of the Federal-aid Highway Program.

SoE alumni, faculty, students, and local industry members all joined to honor and celebrate the recipients at the networking dinner event. Prior to the ceremony, Everett stopped by SoE and Rutgers Center for Advanced Infrastructure and Transportation (CAIT) for a tour of the new Richard Weeks Hall of Engineering, The Bridge Evaluation and Accelerated Structural Testing lab (The BEAST), and other developments at the university. 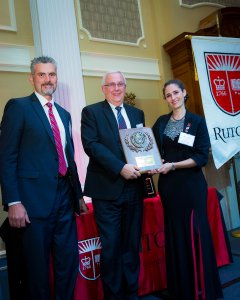 Thomas D. Everett was presented with his award by members of SoE and CAIT. Photo ©Roy Groething Images.

Dr. Franklin Moon, a Professor in The Department of Civil and Environmental Engineering at Rutgers and a CAIT-affiliated researcher, presented Everett with his award and also led him through the tour.

He said that it was important that Everett got the chance to tour the new SoE and CAIT facilities.

“I think it was great that Tom got the chance to see all that Rutgers engineering has accomplished in recent years, and has to offer to the field of civil engineering and beyond,” Dr. Moon said. “Being able to show him The BEAST lab was important too as we look to continue working with FHWA on this exciting research.”

The tour began with an information session detailing developments at Rutgers from the opening of The Richard Weeks Hall of Engineering in 2018 to the growing and diverse programs and class sizes now offered to engineering students. Then, Everett toured the new building and visited CAIT’s Virtual Reality Lab before meeting with Dean Farris.

Eventually they traveled to Livingston Campus to see The BEAST in action, and get a walkthrough of the Rutgers Asphalt and Pavement Lab. Researchers recently began work on the deck of a full-scale steel girder bridge within The BEAST as part of a project sponsored by FHWA.

“Congratulations to Tom on earning this distinguished award, and I hope he enjoyed seeing just how far Rutgers has come since his days here as a student,” Dr. Moon said. “We are looking forward to seeing what innovative projects Tom and the FHWA take on next.”