Primarily focused on the performance of structures under fire, Dr. Negar Elhami Khorasani is currently researching damage to concrete railway-tunnel lining during fire events — which can have millions of dollars of impact — through a UTC Fire in Tunnel Collaborative Project at CAIT. She also recently earned the Early Career Faculty Award from the American Institute of Steel Construction for her research and teaching on the impact that fire has on steel structures. 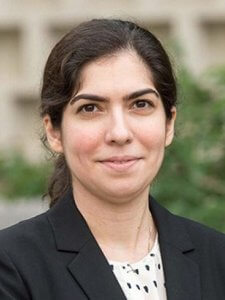 Major tunnel fires not only result in the loss of lives, but can also cause property damage and long service disruptions that can result in millions of dollars lost and major socioeconomic impacts.

While much research has gone into evacuations and safety surrounding fire events in tunnels, less has been done in the areas of risk assessment, damage quantification, and resilience — where the Center for Advanced Infrastructure and Transportation (CAIT) Fire in Tunnel Collaborative Project comes into play.

“Imagine you have a key tunnel within your infrastructure network that is shut down for repairs,” Dr. Khorasani said. “If there’s no redundancy in your system, the freight or people that need to go through that tunnel get affected. Repairs can take months too, we’re not talking about days, and that could mean millions of dollars in economic losses.”

For her innovative work on projects like this and teaching efforts in steel and fire engineering, Dr. Khorasani was also recognized as a rising star in the industry by the American Institute of Steel Construction (AISC). She recently received the AISC Early Career Faculty Award and will be formally recognized at the 2020 NASCC: The Steel Conference in Atlanta, April 22-24.

“It’s definitely an honor to have received this award,” she said. “AISC is a key institute in moving structural fire engineering forward, and one of my areas of research relates to performance-based fire engineering with the objective to develop designs that are more efficient and safe for steel structures. So, having received the award from AISC is definitely an honor for me.”

She has served as an assistant professor at the University at Buffalo since 2016. In addition to research and teaching graduate and undergraduate level courses, she is professionally active in journal manuscript reviews, committee, and community works bringing engineering to K-8 students.

Dr. Khorasani said that in year one of the Fire in Tunnel Collaborative Project, the team looked at design-fire scenarios for railway tunnels and recommended design temperatures for damage assessment of reinforced concrete lining in a railway tunnel.

Researchers will be examining the level of damage as well as behavior of the specimens during the test.

“Our vision is to have these tests as realistic as possible,” she said. “That’s why the slabs are both loaded to resemble the overburden stresses in a tunnel, and restrained to resemble the stiffness of the tunnel structure.” 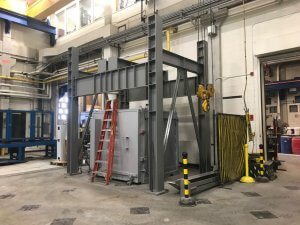 To help ensure that the research is realistic and applicable to industry, the University at Buffalo has also engaged Mr. Gary English, recently retired Deputy Fire Chief of the Seattle Fire Department Underground Command and Safety, as a project stakeholder.

With more than 30 years of experience in the fire service, and involvement in several fire and tunnel related technical groups and panels including the National Fire Protection Association (road tunnel, rail tunnels) and the Transportation Research Board (underground and light rail), Mr. English will provide feedback on the project.

“Science enlightened the tunnel industry on unexpectedly rapid fire growth rate and higher heat release rates which can occur in tunnels,” Mr. English said. “This has led to improved safety and efforts to prevent structural damage. These newer tests will clarify a path forward to improve tunnel structural resilience and thereby reduce tunnel closures and resultant negative economic impacts — definitely worth the effort to protect our infrastructure and potentially save millions of dollars.”

Based on the findings from this round of testing, Dr. Khorasani said that the intended outcome of the project is to improve modeling techniques, make recommendations, and propose design guidelines for structural fire resistance of railway tunnels.

“A lot of research has been done on evacuation and safety, but damage quantification and risk assessment frameworks for fire design of tunnels have not received as much attention,” she said. “Now we want to learn more about how to save the structure and save the economy.”