Rutgers researchers detail a potential system to generate sustainable electricity from roads and bridges by harvesting the kinetic energy of vehicles using piezoelectric materials in pavement.

U.S. roads already do triple duty: as arteries that carry the lifeblood of our economy, as conduits for many emergency services, and as links that connect Americans to each other and the vast opportunities and beauty of our country.

Now, Dr. Hao Wang (Rutgers, Civil and Environmental Engineering) and his collaborator, Dr. Ahmed Safari (Rutgers, Materials Science and Engineering) have found a way that roads can serve yet another purpose: as a sustainable source of energy by using piezoelectric transducers in the pavement.

Using piezoelectric materials that generate electric charges when they are subjected to mechanical stresses, Wang and his team have developed a system that can capture the kinetic energy from traffic loading and convert it to electrical power.

Early research on energy harvesting from road and airport pavements was supported by CAIT using a portion of its USDOT University Transportation Center grant. Wang also collaborated with two university partners in Brazil and China under the support of Rutgers Global Grants.

“We have developed an innovative energy harvesting module using an integrated approach of multiphysics modeling and experiments in the lab. The new design of piezoelectric transducers can produce much greater energy output than previous designs we found in our literature review,” says Wang.

Wang points out several energy harvesting technologies that can potentially be incorporated into roadways.

“Mechanical energy exerted by traffic, especially heavy trucks, can be converted into electricity in several ways. The mechanical stress from traffic can be captured by piezoelectric material, or causes relative movement in electromagnetic generator. Also, significant solar energy absorbed by pavement can be harvested using photovoltaic cells, heat flux, or thermoelectric material. Even geothermal energy can be collected with a heat pump and underground thermal energy storage,” Wang explains.

Technologies that can turn roads and bridges into “power plants” 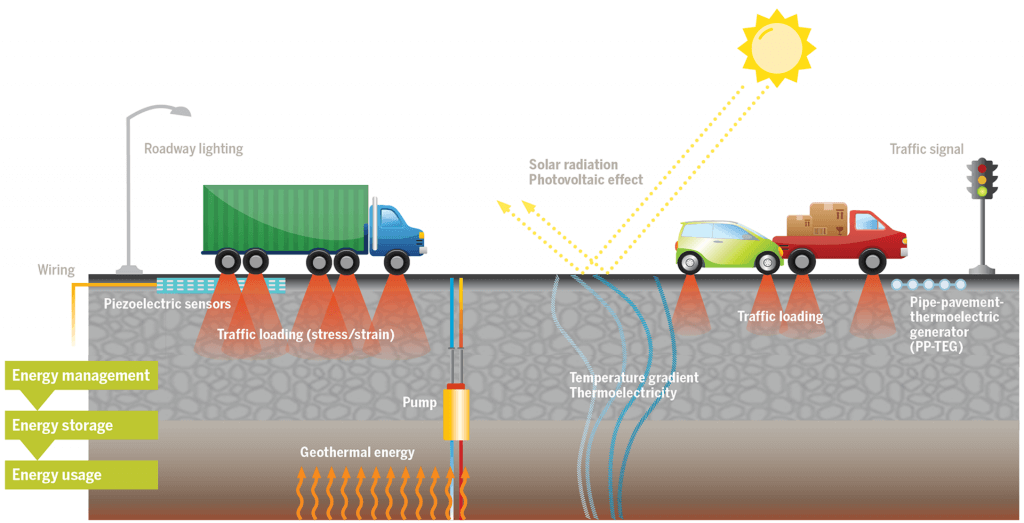 A cross section diagram of a roadway showing different technologies that could be used to capture and store energy. ©Hao Wang, et al./Illustration A. Thomas.

Wang presented on this topic as the keynote speaker at the International Conference on Transportation Infrastructure and Materials (ICTIM) held in Tianjin, China, in June 2018.

The first paper presented a comprehensive review of available energy-harvesting techniques that can be applied to roadways and bridges (volume 212, pp 1083–1094), making them a source of renewable energy and improving overall sustainability of infrastructure. The paper compared technologies in terms of power output, cost-effectiveness, technology readiness level, advantages and disadvantages, support from government and industry. It posited that the energy harvested can be used to produce electricity, melt ice and snow, or power wireless sensors, lighting and signals, and devices to monitor structural conditions. Coauthors for the study were Abbas Jasim (who received his Ph.D. from Rutgers in May 2018 and is now a faculty member at Al-Mustansiriya Universitya in Iraq), and Xiaodan Chen (a current doctoral candidate at Rutgers).

­The second paper (volume 224, pp 438–447), covered a piezoelectric energy harvesting module developed at Rutgers. Performance of the module was evaluated in relation to its 1) output and mechanical failure; 2) if predicted voltage and power from numerical simulation matched with experimental measurements; and 3) if output increased proportionally to increases in loading frequency and magnitude.

The new design employs the parallel piezoelectric coefficient under the applied stress, which results in the greater energy output than the conventional design with poling along the thickness of PZT strip.

In addition to Wang, team members for this project were Abbas Jasim, Greg Yesner, Ahmad Safari, Ali Maher, and Basily Basily from Rutgers School of Engineering.

Wang and his team are starting a new project on energy harvesting for New Jersey roadways sponsored by the New Jersey Department of Transportation with total funding of $350,000. 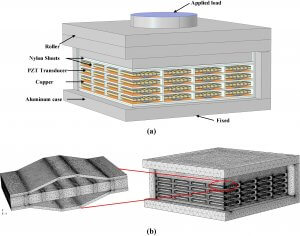