The first page of each tech sheet prominently displays the Crash Reduction Factor (CRF) for the countermeasure. The CRF is the percentage crash reduction that might be expected after implementing a given countermeasure at a specific site.

The remaining countermeasures include CRFs from other sources, including the 2008 report “NCHRP Report 617: Accident Modification Factors for Traffic Engineering and ITS Improvements”2 and the 2012 Accident Prevention & Analysis article “Safety Countermeasures and Crash Reduction in New York City–Experience and Lessons Learned.”3 The second page provides additional photo examples and design considerations including AADT, roadway speeds, and long-term maintenance concerns. For example, when considering crosswalk visibility enhancements, the designer should place parking restrictions, advance warning signs, and advance stop/yield markings at least 20 feet from the crosswalk. When considering raised crosswalks, the designer should avoid priority transit or emergency routes and consider drainage, snow removal, and maintenance of in-street warning signs.

Each tech sheet also provides helpful graphics, such as the rendering of a PHB installation shown in Figure 1, which includes an advance stop bar and warning sign, overhead lighting placed before the crosswalk, and the beacon head. Other countermeasure renderings show options for parking restrictions, curb extensions, bicycle lanes, and other roadway design features. Agencies can refer to these renderings for examples of how the countermeasure may appear on a roadway or in combination with other safety features, such as pavement markings and overhead lighting. Illustrations also include signage that may increase visibility of the crossing or are recommended per the Manual on Uniform Traffic Control Devices.

The tech sheets also include per-unit cost averages or ranges to install the countermeasure based on the 2013 Pedestrian and Bicycle Information Center article “Costs for Pedestrian and Bicyclist Infrastructure Improvements: A Resource for Researchers, Engineers, Planners, and the General Public.”4 For example, the tech sheet for pedestrian refuge island explains that the cost to install is an average of $10 per square foot, but costs can be higher when using concrete instead of asphalt FHWA is producing additional guidance–planned for release by early 2018–to assist agencies with the countermeasure selection. The tech sheets are available on the FHWA STEP website.

State and local transportation professionals should consider sharing the tech sheets as educational materials when discussing pedestrian safety and design improvements with the public and decision-makers. The tech sheets’ succinct descriptions, updated safety benefits, and illustrations of the countermeasures may help agencies take “steps” towards a safer pedestrian environment. 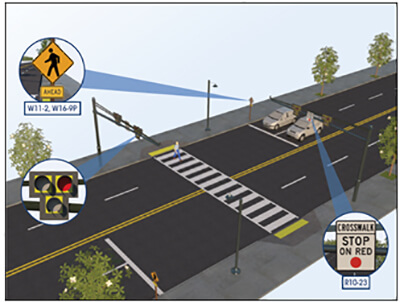