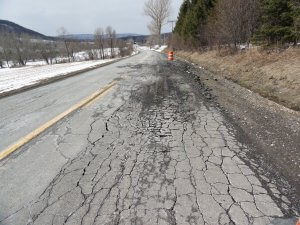 For many local agencies, finding the right pavement design and then gathering the resources to implement it is a pain, and an expensive one at that.

Region 2 University Transportation Center (UTC) partner Dr. David Orr, PE, Director of Cornell University’s Local Roads Program, has been studying the problem. He said that a combination of tight budgets, localized needs, insufficient tools, and a lack of engineering support push many agencies away from doing their own specialized pavement designs — a decision that can lead to underbuilding local roads and the need for costly re-builds earlier than expected.

“The number of local agencies who actually do pavement design is nearly non-existent — most people don’t do it and yet we know they need to,” he said.

To address this issue, Cornell has developed a user-friendly excel-based software tool, RoadPE: LHI, that uses mechanistic-empirical methods to assist local agencies with designing their low-volume roads for various traffic needs. In the end, stakeholders can design roads that will last longer and be built to meet the specific needs of the area.

RoadPE: LHI was made for low-volume roads with less than 2,000 vehicles per day, and uses basic inputs that can be determined by a small highway department and other pre-calculated inputs and design assumptions to help them determine the thickness of a new asphalt layer.

The software tool is now available for download here. To learn more about RoadPE: LHI or to find out more about the upcoming training courses to be offered by the Cornell Local Roads Program, contact Dr. Orr.

The tool is simple to use. It works by providing a few readily available inputs, such as traffic volume and type, site information, and current pavement details, and turns that into information about pavement thicknesses needed for a specific project. It is easy to understand and use, especially within the limited resources of small municipalities, and requires easily obtainable inputs unlike many other pavement design resources.

“Overall, I think it is a pretty impressive tool to use for pavement design,” said Tim Kelley, Engineering Technician at the Wyoming County Highway Department.

The tool was recently tested this fall by towns and counties in New York State on several ongoing projects. Dr. Orr said that he has been working with many local highway departments including the towns of Preble and Hartland, as well as Oswego, Schoharie, and Wyoming counties in New York State. He hopes to help these stakeholders while also using their feedback to refine future versions.

In its current state, the tool operates as an excel-based spreadsheet. Depending on its use and demand, a longer-term goal could be to turn it into an app to further address the needs of local agencies.

“Generally speaking, local agencies don’t have engineering support and if they do its limited,” Dr. Orr said about why local agencies do not do their own pavement design. “And, if it’s limited they’re probably going to hire the engineers to do bridges and things that require a lot more structural analysis.”

With that in mind, he set out to keep the software tool simple and easy to use.

One example, the approximately 2,000 vehicles per day limit also matches the tool up with the newly updated American Association of State Highway and Transportation Officials (AASHTO) “Little Green Book” Guidelines for Geometric Design of Low-Volume Roads, he said.

The tool will round asphalt thickness to the closest half inch. Dr. Orr said that is what is realistic for the construction of most local roads.

Using data from the Northeast Climate Center and the National Oceanic and Atmospheric Administration, Cornell is also currently updating seasonal maps used with the tool that they plan on releasing in the near future. 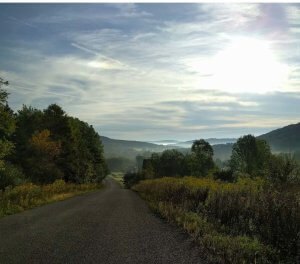 Dr. Orr said that in some cases users will find that the life of their pavement has already been exceeded. This tool will let them know whether it can be rehabilitated or if the pavement needs to be replaced.

“What it will do is calculate how to get the design life for each of those four categories, and what thickness is needed for the asphalt layer on top,” he said.

When an agency does not prepare a specific pavement design, what ends up getting built is often times underbuilt, he explained. While they might have saved some money at the time of building, the cost comes back to bite when the road then needs to be rebuilt earlier than expected.

He believes this tool will allow local agencies to design their roads properly for the traffic loads they face, and will be a useful countermeasure against budgetary constraints and inappropriate tools that force towns and villages to underbuild, leading to premature failure.

The software will also help agencies get into the mindset of building pavement that lasts longer.

“You take that same pavement on Long Island that lasts for 10 years and you use it in the Adirondacks, it might only last for 7 or 8 years due to climate differences. As you start getting longer design life you need to be a little more precise than what most agencies are able to do,” Dr. Orr said. “RoadPE: LHI is a tool which allows local agencies with local knowledge to design their roads to handle the loads.”