The ways that robots can help care for and manage our roads, bridges, and other infrastructure are continually expanding. Convincing transportation agencies to use them is key for a future that makes monitoring, maintaining, and repairing the country’s infrastructure safer, faster, and more efficient.

On May 30, the Center for Advanced Infrastructure and Transportation (CAIT) brought together more than 70 researchers, agency officials, and private industry leaders to discuss the seemingly endless applications for robots in the transportation infrastructure sector, and how to overcome inertia in a portion of the market that has been reticent to adopt the technology.

From flying drones to creepers, and from rigid machinery systems to soft robots, these technologies have a mix of mobility, strength, and configurability that can make them valuable tools for infrastructure maintenance, condition monitoring, and construction projects.

The workshop, “Emerging Robotic Solutions for Infrastructure Management,” began with a keynote speech from Carl Haas, Ph.D., a professor of civil engineering at the University of Waterloo and fellow of the Canadian Academy of Engineering. His specialty areas are advanced construction, transportation technology, sustainability, and construction productivity.

The theme for his talk was robots, risk, and rework. Haas said that robots can help agencies and companies make maintenance work more affordable and efficient, but that there are other reasons why the technology is not always easily adopted.

He recalled a time early on in his career when he was working on an automated crack-sealant system. The robotic technology he developed worked and was successful in addressing the need, but it was the implementation of the technology into the industry where he faced a roadblock.

Haas holds various editorial positions and serves on a number of professional committees including the Transportation Research Board (TRB). At TRB, he has served for more than 20 years, including as chair of the Committee on Applications of Emerging Technologies (A2F09, 1996-2002), a member of the Group 2 Council on Design and Construction of Transportation Facilities (2003-2006), and a member of the Committee on Construction Management (AFH10). He has also has received numerous awards for his work, such as the ASCE Peurifoy Construction Research Award. 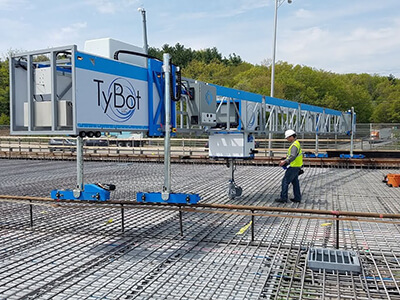 Following the keynote speech, researchers from CAIT and partner universities shared the vision for the workshop and a panel of experts discussed both current and emerging solutions in robotics.

Dr. Frank Moon, a civil engineering professor at Rutgers School of Engineering and a lead bridge researcher at CAIT, said that being able to talk with owners about issues they are facing is important in developing innovative and relevant technology.

“Owners have an enormous amount of heuristic knowledge,” he said. “I think probably half of the body of knowledge that’s part of the civil engineering profession is not written down in books. Talking with owners about events that happened, partial failures, full failures, what did they do, what worked, what didn’t work—you learn an awful lot from that.”

Carson Carney, Vice President of TyBot, discussed one of his company’s products: TyBot. It is an autonomous device that can tie rebar quickly and accurately, reducing labor needs in construction, for example, a bridge deck.

A leader in innovation and a strong believer in using robotics and other technologies as part of the practical solutions they develop for infrastructure management, Rutgers CAIT is home to many cutting-edge technologies. Throughout the day, tours explored the recently-opened Richard Weeks Hall of Engineering, including the CAVE Visualization Lab and CAIT’s Bridge Evaluation and Accelerated Structural Testing lab (The BEAST).

Dr. Jie Gong, associate professor of civil and environmental engineering at Rutgers, demonstrated some of his work in the lab using augmented reality (AR) and virtual reality (VR). One of his AR projects focuses on life-cycle management of transportation infrastructure.

Gong has developed two fully-immersive virtual environments modeled the Stan Musial Veterans Memorial Bridge, which crosses Mississippi River—linking St. Clair County, Illinois, and the city of St. Louis, Missouri—and an in-service pump station. These virtual environments can be used for bridge inspection simulations, workforce training, and much more. For example, crews can use a bridge VR to simulate the setup of work zones, view the traffic flow, and make safety improvements.

The day concluded with a series of lightning presentations of researchers’ latest work, and a discussion wrapping up opportunities identified in the workshop and ways to move forward.

Moon said that while owners and academia might have different focus areas or timelines on some projects, it’s important to collaborate to ensure that research is impactful, relevant, and moving down the right path.

“It takes effort to build trust and relationships,” Moon said about the importance of working together. “And to me, all of the successful interactions I’ve had with owners has been because there is a relationship there that allows me to speak my mind, they can speak their mind, and we come up with something valuable at the end.”

CAIT plans to schedule more workshops and meetings with user groups and owners in the future to find new ways to further implement robotics into infrastructure management. The center also invites other interested stakeholders to join as well, so that this initiative can continue to grow. 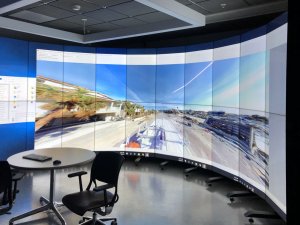 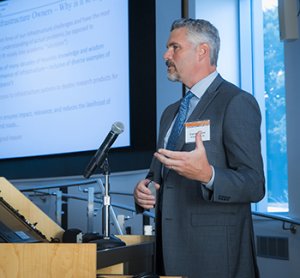 Civil engineering professor Franklin Moon Moon said that while owners and academia might have different focus areas or timelines it’s important to collaborate to ensure that research is impactful, relevant, and moving down the right path. Photo: ©Roy Groething/Rutgers CAIT. 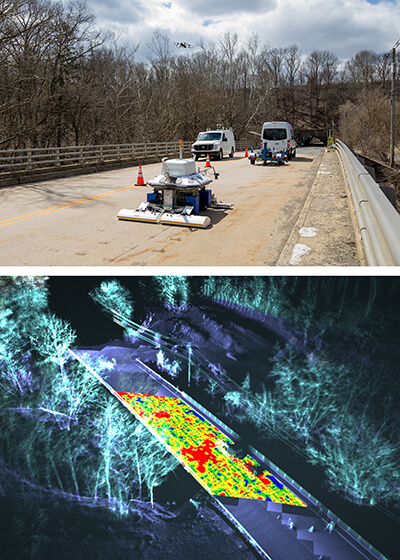 CAIT uses multiple autonomous nondestructive and remote sensing tools to gather data on infrastructure condition. This data can be combined with lidar scans to create a 3D condition map.