A CAIT-affiliated researcher at Rowan University recently received a $40,000 NCHRP grant to continue his critical work studying Wrong-Way Driving events and preventing fatalities caused by this highway phenomenon. Since 2012, Dr. Mohammad Jalayer has investigated this issue across the nation, including a recent project partnering with Rutgers CAIT and other universities that used drones in an innovative way to inspect highway interchange assets. 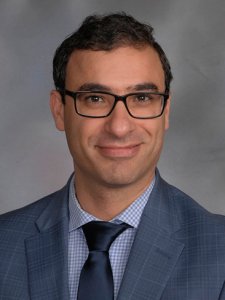 Dr. Mohammad Jalayer is an assistant professor of civil and environmental engineering at Rowan University.

The high-speed, head-on nature of Wrong-Way Driving (WWD) collisions makes them much more severe and likely to cause fatalities than other types of crashes. Each year, approximately 400 fatalities are attributed to WWD in the United States, with New Jersey ranking among the top 15 states with the most wrong-way driving fatalities.

These incidents are caused when a driver mistakenly enters a freeway from an exit ramp, or moves against the flow of traffic on any roadway, and have long been a critical safety issue for transportation agencies.

Now, a $40,000 grant from the National Cooperative Highway Research Program (NCHRP) will allow Dr. Mohammad Jalayer, an assistant professor of Civil & Environmental Engineering at Rowan University and a Center for Advanced Infrastructure and Transportation (CAIT) affiliated researcher, to continue working on solutions to this major highway-safety issue across the nation.

“We want to identify gaps in existing research and put together a handbook of traditional and advanced safety measures for these practitioners to use,”  Dr. Jalayer said in a Rowan Today article. “These measures can be implemented across the country.”

The risk for WWD crashes is greater at night time, in less than ideal conditions, and when drivers are impaired or under the influence of alcohol or drugs, according to Rowan Today. But, there are a lot of preventative measures that can be implemented such as optimizing “Wrong Way” signs, creating more enhanced and dynamic signs, and even changing the design and types of interchanges and ramps could go a long way toward preventing these accidents from happening.

Dr. Jalayer and Rowan are joining Auburn University in Alabama, the University of South Florida, and Arora and Associates, in what will be a three-year project that received a total of $600,000 in NCHRP funding, according to Rowan Today.

“Every civil engineering faculty is looking for this kind of grant,” he said. “We ended up with a great team, and I was so happy to hear we were selected.

One recent example of Dr. Jalayer’s work on this issue was a collaborative project between Rutgers CAIT, Rowan University, and other universities that examined the application of Unmanned Aerial Vehicles (UAS) to inspect and inventory interchange assets to mitigate WWD. The research was featured in the July 2019 edition of the Institute of Transportation Engineers (ITE) Journal, and explored using drones to collect high-quality data from exit-ramps regarding these crashes. It found that when equipped with cameras, drones can be used to inspect and inventory exit-ramp assets to gather information and learn more about the causes of WWD collisions.

“Traditional methods of collecting WWD data are time consuming and expose crews to traffic hazards,” Dr. Jalayer said. “We showed here that drones have the potential to collect accurate data in a faster, safer, and more efficient way—all of which could help in reducing WWD crashes and accomplishing the ‘Toward Zero Deaths’ goal of many transportation stakeholders in the future.”

Results showed that in one of the interchanges there were no “Wrong-Way Arrows,” other markings such as stopping lines at the end of exit ramps, or design features in place to prevent vehicles from driving the wrong way on the exit ramp. At another interchange, there were no “Do Not Enter” signs, other markings, or design features to prevent drivers from going the wrong way.

Jalayer said a lack of information to guide drivers at these locations is a missed preventative measure against WWD incidents.

“Past studies have shown that exit-ramp terminals are the most common location for drivers to enter a highway going the wrong direction,” he said. “If we do not have the proper signs or features, the risk of a WWD crash could increase.”

For his new NCHRP project, the work will culminate in a national wrong-way driving summit, expected to take place in Irvine, Calif., in 2021, according to Rowan Today. There, Dr. Jalayer and his team will present the results of their studies to practitioners from all 50 states, including traffic engineers and representatives from state departments of transportation and local government agencies.

He emphasized the impact and importance of researching this critical safety area.

“Fatalities have a direct cost and an indirect cost: the burden to society, the impact on the family,” Dr. Jalayer said. “We can save people. If I save one person’s life, that’s an achievement.”