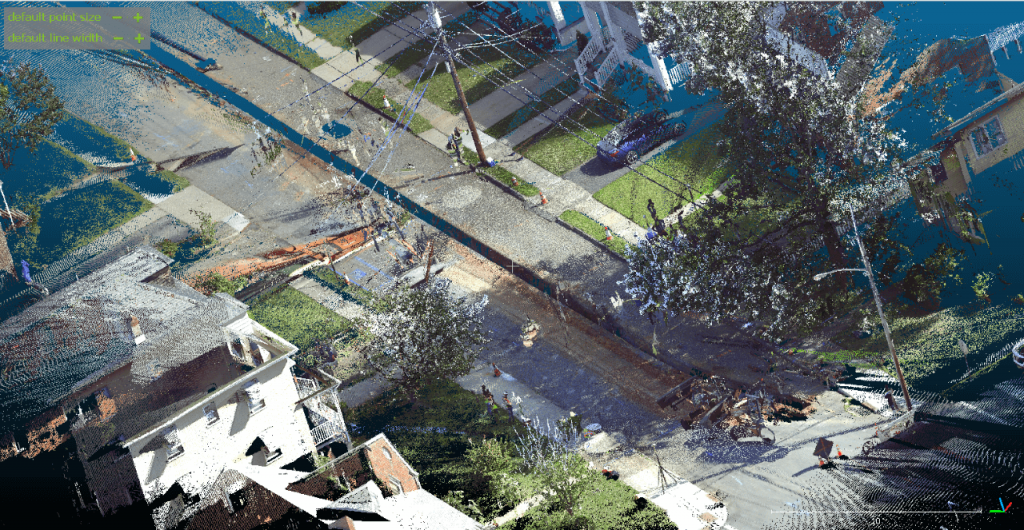 Elizabethtown Gas brought in a Rutgers Drone team to map a gas pipeline replacement project and capture geolocations of newly installed underground infrastructure. The data collected will help the team develop enhanced As-Built models that are vital for informing stakeholders in the area so that they can act confidently in the event of future emergencies, digging, or construction projects. 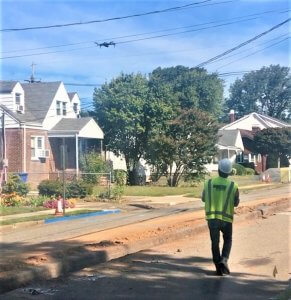 A Rutgers drone team used Unmanned Aerial Vehicle (UAV) technology to map an on-going construction site in Fords, New Jersey last month as part of a project to develop As-Built 3D models that stakeholders can use to accurately locate the underground infrastructure in the future.

The construction project is part of a five-year Elizabethtown Gas pipeline replacement plan that began July 1, 2019 to replace old or damaged cast iron pipes with more durable polyethylene (PE) pipes. Rutgers engineering students led by Dr. Jie Gong, an associate professor in the Department of Civil and Environmental Engineering at Rutgers and a CAIT-affiliated researcher, scanned the pipeline trench using UAV and Light Detection and Ranging (LiDAR) technology with the goal of ultimately generating accurate and geo-referenced As-Built 3D models.

This drone mapping project is tied into Dr. Gong’s related UTC work on delivering maintenance and repair actions using automated and robotic systems. He said that when a construction project is planned, often times, the final product is different than what the engineers had originally designed. This is due to real-world factors that force construction workers to adapt the project while on the job. So, As-Built drawings and models are created once the project is finished and represent a space as it was actually constructed. Technologies that can automate capturing and documentation of as-built conditions for infrastructure construction projects will be a game changer for the transportation industry.

As-Built drawings and models serve as important reference materials, he said, particularly in future pipeline-construction projects or any other excavation projects in the proximity of the buried pipelines. For both scenarios, construction crews require precise data in order to identify spatial constraints they have to work around.

“As-Built drawings are an essential part of construction projects as they are used to replicate how the contractor completed the project and identify the changes that were made throughout the course of the project,” Dr. Gong explained.

He said the idea of working with the drone team was to help produce a more detailed depiction of the exact locations of the newly installed facilities.

“The Construction Department at Elizabethtown Gas is constantly looking to improve our processes and take advantage of new technology,” Zajac said. “The hope was that the drone would be able to capture geolocations of the underground facilities and produce a more detailed depiction of the exact locations of the newly installed facilities. The importance of having a detailed record of our infrastructure is vital to our business for locatable purposes and in the case of emergencies the gas company can act with confidence knowing exactly what and where our facilities have been installed based on the data collected from the UAV. It was a pleasure to work with the Rutgers drone team on this initiative.”

Sun Ho Ro, a Doctoral student and Teaching Assistant in the Department of Civil and Environmental Engineering at Rutgers and a student of Dr. Gong, led the drone flight. He is a Federal Aviation Administration (FAA) certified remote pilot, and all flight operations were conducted under FAA Section 107 Rules, ensuring codes and safety. 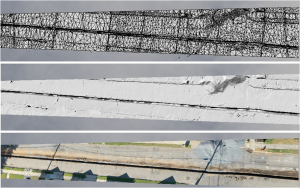 A combined 3D mesh model from UAV footage and LiDAR scans done by the Rutgers drone team. This model and others will help engineers understand how the gas pipeline replacement was actually built and installed. Photo ©Sun Ho Ro.

He explained that conventional As-Built models are manually drafted 2D Computer Aided Design (CAD) drawings that can be inefficient and have limitations when it comes to documenting certain details and characteristics of a new asset. Some cons of conventional CAD As-Built drawings include that they can take an average of 45 days to develop, are more susceptible to human error, and often lack geo-referencing.

“On the other hand, the UAV pilot project is a great alternative method for As-Built models as they are cost-effective, use advanced and highly accurate technology, and have the ability to speedily generate accurate 3D models,” Ro said.

The 3D models that the Rutgers team created are geo-coded to have accurate GPS points and can imply a variety of information and data such as change in plan, XYZ-coordinates, Geographic Information System, and map overlay, he said.

“Data collection from UAV and LiDAR as well as the 3D models were successful,” He said. “We were happy to use our technology and expertise to work on this initiative with Elizabethtown Gas.”