No end to the usefulness of Rutgers flying/diving drone

Rutgers’ Naviator, a unique autonomous device that can both fly and maneuver underwater, conducted the first combination aerial and underwater bridge inspection of the Delaware Memorial Bridge Twin Spans on June 18. CAIT has been assisting with development of the Naviator for more than a year, providing piloting and logistics support.

The Naviator was created at Rutgers School of Engineering (SOE) by mechanical and aerospace engineering professor Dr. F. Javier Diez and his team, who launched the first prototype in 2013 after receiving a grant contract from the Office of Naval Research (ONR).
The bridge inspection test flight was a cooperative venture of the Delaware River and Bay Authority (DRBA), Rutgers SOE, CAIT, and SubUAS LLC.

CAIT assistant research engineer Michael O’Connell was the pilot in command and Marco Maia was at the controls. Additional support for the inspection was provided by numerous DRBA bridge and ferry employees and Rutgers Center for Ocean Observing Leadership.

“The Naviator’s ability to seamlessly transition from flying to maneuvering underwater provides tremendous opportunities for a number of industries,” said Diez. “What previously might require a helicopter, boat, and underwater equipment, the Naviator was able to complete a single deployment [with fewer logistical hassles] and in less time, as it proved today.”

We’re pleased to be able to participate in this test demonstration,” remarked Thomas J. Cook, executive director of the DRBA. “Our infrastructure assets are subject to rigorous inspection programs on an annual basis and drones have the potential to make these inspections significantly safer and more cost efficient. The ability to have a single autonomous vehicle inspect piers or vessels both above and below the waterline is no longer science fiction.”

The potential for this drone seems to be constantly expanding. The original ONR project conceived Naviator as a tool for surveillance of ports or other homeland security targets, especially during emergencies when other safety systems may be compromised.

“The drone’s ability to repeatedly [transition between air and water] in less than two seconds has opened up novel markets that will find this amazing technology’s capabilities advantageous,” said Mark Contarino, vice president of technology, SubUAS LLC, the company founded to commercialize Naviator.

Now, in addition to bridge inspections and keeping an eye on high-priority transportation assets, applications that already have been identified for Naviator include mapping of the ocean floor, search and rescue operations, humanitarian missions, and evaluation of environmental incidents like oil spills and algae blooms. 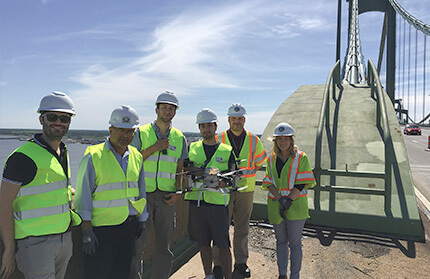 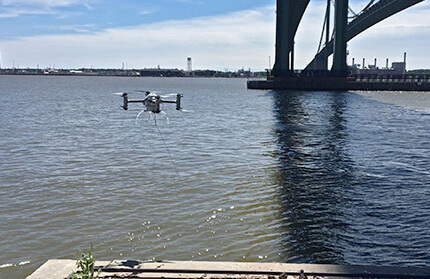