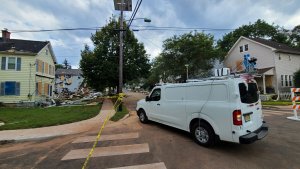 Since Hurricane Ida struck New Jersey, a team of Rutgers engineers, researchers and students has been in the field assessing flood damage and gathering data to help improve flood prediction models and how New Jersey responds to future storms.

Hurricane Ida caused multiple tornadoes to touch down in the state, brought record-breaking rainfall and unexpected flash flooding that submerged houses and vehicles, and wreaked havoc across the region.

Rutgers and New Brunswick were hit by flooding along the Raritan River that shut down Route 18, River Road and other streets. 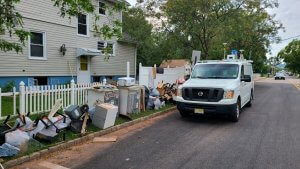 Researchers at Rutgers and the Center for Advanced Infrastructure and Transportation (CAIT) have been helping New Jersey learn more about the storm damage and to recover both locally and statewide by gathering informative post-disaster data.

Jie Gong, an associate professor in the Department of Civil and Environmental Engineering at the Rutgers School of Engineering and a CAIT-affiliated researcher, has been working with students in his lab to survey the damage with drones, van-based lidar systems and other innovative technologies.

“We have been sweeping through many severely impacted areas to gather post-event data,” Gong says. “Last week, we covered tornado damage in South Jersey, and now we are currently studying flooding in Manville, among other towns that were impacted. Much of this work will help us to quantify the extent of flooding and improve flood prediction models that can be used to inform policy and improve safety for at-risk communities going forward.”

His team had mapped many areas in Union, Somerset and Middlesex counties in July and August as part of related research with the Federal Emergency Management Agency (FEMA) to investigate the status of buildings and infrastructure in the New Jersey Flood Plain and potential climate-related threats. These data provide unique baseline data sets to examine the impact of Hurricane Ida and calibrate flood models for the region.

Combining this pre-storm data with what they have been collecting following Hurricane Ida will allow researchers to compare the damage, better understand water levels and the depth of the flooding and visualize the impacts of the storm using digital models and environments.

“At our lab, we have unique visualization and analytics capabilities that when combined with the right storm data can allow us to create digital water-elevation models and flood prediction models for future storms,” Gong says. “This type of applied information is important because it can help decision makers in New Jersey to better understand what regions may be at risk, to make more informed asset management decisions when it comes to rebuilding damaged roads and infrastructure, and to better prepare for the impacts of climate change in the region.” 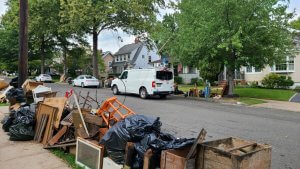 Much of Gong’s research deals with assessing infrastructure damage following natural disasters, including leading missions after Hurricane Sandy and other storms to deploy LiDAR technology and gather data and images to improve infrastructure resilience and building.

He says being able to compare destruction data from past storms such as Hurricane Sandy, Hurricane Irene and others to recent storms can also provide insight into how the state was impacted and the best ways to rebuild with safety and resiliency in mind.

“Collecting, analyzing and sharing this information is vital to the safety and preparedness of the state going forward, especially as climate change and other factors impact our region,” Gong says. “The more data we have on storms such as Hurricane Ida, the better we can plan for future natural disasters and weather events.”