CAIT researchers have demonstrated that mechanical vibrations have the potential to be one possible solution to alleviating the “ice bomb” dilemma. That is, ice accumulating on the stay cable sheaths of cable-stayed bridges and falling to the roadway below. Through a recent UTC project, researchers tested a novel deicing system which employed the use of these vibrations to shed ice as it accumulates—preventing the large ice chunks from falling onto roadways. 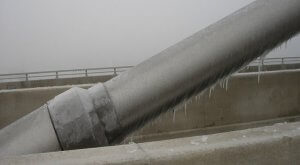 When driving in freezing rain or a snow storm, slippery roads and low visibility are not the only things drivers should be looking out for. “Ice bombs,” or large chunks of falling ice that accumulate under the right wintery conditions on the stay cable sheaths of cable-stayed bridges, can cause significant property damage, safety concerns, and traffic delays for the vehicles crossing below.

A simple Google search can show you why. In February, news outlets reported ice bombs reappearing on the Alex Fraser and Port Mann bridges in British Columbia, Canada, for example. While ice bombs are not a common occurrence on cable-stayed bridges, any of these bridges that potentially experience ice storms may be at risk, and there is currently no industry standard response.

That is why researchers at the Rutgers Center for Advanced Infrastructure and Transportation (CAIT) fabricated and extensively tested “SHAKEY,” a novel deicing system thought up by Carson Carney of SHAKEY Deicing, LLC that uses mechanical vibrations to shed ice from stay cable sheaths in a safe and efficient manner.

Operational conditions that SHAKEY would have to perform in were recreated as accurately as possible during the project’s testing. This allowed researchers to evaluate the system, notice any shortcomings, and recommend future developments for eventual deployment on real world bridges.

“While other technologies have been deployed to try and reduce ice accumulation on stay cable sheaths, as of right now there is no industry standard when it comes to solving this issue,” said Shane Mott, senior research engineer at CAIT and project lead. “Ice bombs have become a growing concern due to the traffic disruptions that they cause as well as the property damage to vehicles below.”

SHAKEY works by employing an array of vibrating masses that operate inside the protective stay cable sheath, Mott said. Traveling between the steel cable strands and the protective sheath covering them, it uses mechanical vibrations to shed any ice that has accumulated around the outside of these stays.

For the project, researchers first had to emulate the ice formation found on at-risk cable-stayed bridges. Fabrication of the prototype SHAKEY deicing unit as well as the design and construction of an appropriate operating platform to validate SHAKEY was also developed in this project. Researchers then tested “ice shed performance” at horizontal and angled positions with different ice lens thicknesses. 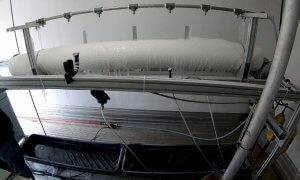 A photo taken during one of the ice shed tests with the SHAKEY system. Photo ©Rutgers CAIT.

With the access granted by the large environmental chamber of the BEAST laboratory, CAIT researchers have the capability and resources to provide further testing on stay cable deicing systems, including any new potential technologies that may be devolved in the future.

While the SHAKEY system excelled at shedding ice thicknesses from medium and heavy ice accumulations, further testing can be done on the thinner ice layers formed around the sheath to see exactly at which point the system struggles to shed this ice, and if ice at this thickness is even a concern, Mott said. In addition, more work can be done to address issues of design durability and the system’s response to vibration fatigue that arose during the study as well.

“This project was developed with the idea to help alleviate the shortcomings of the current solutions available and the lack of an industry standard response to the ice bomb dilemma,” Mott said. “Looking ahead, we can use what we’ve learned from this project as a valuable guide to future research involving mechanical vibrations being used to solve our ice bomb problem.