This summer, the FRA issued a notice of funding opportunity for state of good repair projects including a total of $291.4 million in grant funding to help repair vital intercity passenger rail assets. Of that funding pool, NJ Transit was later awarded $18.3 million to upgrade the Trenton Transit Center, and Rutgers CAIT helped secure this funding by providing the Benefit-to-Cost Analysis. 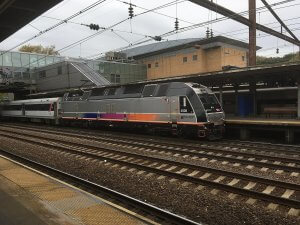 Under the fiscal year 2020 State of Good Repair Program, The Federal Railroad Administration (FRA) awarded approximately $291 million in grant funding to help improve rail assets nationwide, of which NJ Transit received $18.3 million for repairs at the Trenton Transit Center, according to an FRA announcement this October.

For NJ Transit, the money will go to upgrades at the Trenton Transit Center that serves Amtrak intercity train services and NJ Transit commuter service. According to FRA, these upgrades include rehabilitating two island platforms and upgrading a side platform to high-level boarding, repairing existing platforms that have begun to deteriorate, and expanding station capacity at the Trenton Transit Center.

Overall, the project covers a number of repairs such as refurbishment of vertical circulation elements, canopies, platforms and roofs, construction of new shelters for some platforms, and making the platform ADA compliant by raising its level and general maintenance works to ensure state of good repair in the station.

Rutgers Center for Advanced Infrastructure and Transportation (CAIT) played an important role in ensuring the funding of these upgrades for NJ Transit by providing the Benefit-to-Cost Analysis (BCA) that examined economic benefits associated with the proposed rehabilitation project at the Trenton Transit Center.

“NJ Transit plays a critical role in meeting New Jersey’s transportation needs,” said CAIT Director Dr. Ali Maher. “CAIT was happy to put its resources and research expertise to use as part of this project and help to maintain the state of good repair at NJ Transit stations that allows the agency to continue offering high levels of service to commuters.”

Overall, the BCA showed that the investment was cost effective.

The repairs to be made at Trenton Transit Center align with the goal of the State of Good Repair Program, which is to improve intercity passenger rail performance by funding capital projects to repair, replace, or rehabilitate publicly owned or controlled railroad assets, according to FRA.

“This $291 million in federal grants will upgrade rail infrastructure and enhance railroad safety and reliability in communities across America,” said U.S. Transportation Secretary Elaine L. Chao in the FRA announcement.

Recently, CAIT has been working closely with NJ Transit on a number of repair and asset management projects. In May for example, more than $91.5 million in funding from the FRA was announced to advance the replacement of the Portal North Bridge and make other upgrades to improve service along Amtrak’s Northeast Corridor.

NJ Transit was awarded $36,408,410 to reconstruct electrical substation 41 in Kearny, NJ that supplies power to a stretch of the NEC and existing Hudson rail tunnels leading into New York Penn Station. CAIT assisted with the project by providing the cost benefit analysis required to secure federal funding for the substation to help strengthen resilience along the NEC.

In another recent project, The NJ Transit Board of Directors recently approved an approximately $250 million contract with George Harms Construction for the initial construction phase of the Raritan River Bridge Replacement project.