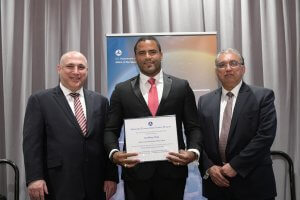 Polytechnic University of Puerto Rico student, Geoffrey Vega, receiving his CAIT Student of the Year Award at the CUTC Banquet.

When Hurricane Maria struck Puerto Rico the effects were devastating, causing more than $90 billion in damages. In the aftermath of the storm, UTC partners at the Polytechnic University of Puerto Rico studied critical bridges, traffic signs, and infrastructure to learn from the damage and rebuild these transportation lifelines with improved resilience. Geoffrey Vega, a Ph.D. student in Engineering & Applied Sciences, played a vital role in the research and was recognized for his work at the CUTC Awards Banquet during the 2023 TRB Annual Meeting.

At the 102nd annual TRB meeting, Geoffrey Vega, a Ph.D. student in Engineering & Applied Sciences at the Polytechnic University of Puerto Rico (PUPR), received the 2022 Student of the Year Award alongside his peers at the CUTC Annual Banquet on Saturday, January 7th.

In addition to his studies, Geoffrey is also a full-time engineering instructor at The University of Puerto Rico at Ponce and previously worked in private industry as a Project Engineer on major construction projects across Puerto Rico.

Upon completing his Ph.D., Geoffrey hopes to continue his career in academia and research.

His research is focused on cantilever traffic signs; first on case identification, field studies, and data collection; then on damages evaluation and assessment; and lastly on applying Finite Element Analysis and Computational Fluid Dynamics to assess the behavior of this type of traffic sign under extreme wind conditions.

When the Category 4 storm struck Puerto Rico it devastated the island, leaving nearly $100 billion in damages, approximately half a million houses damaged or destroyed, cut off electricity to the island, and shut down critical transportation lifelines. 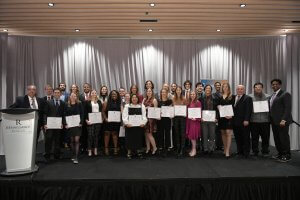 All student award winners at the 2023 CUTC Banquet.

In the years following, CAIT-affiliated researchers at the Polytechnic University of Puerto Rico (PUPR) collected field data from damaged traffic signs and bridges, testing these transportation assets to better understand their structural failures and breaking points during the storm.

They are now making recommendations based on these findings — including a review of design specifications and improvements on quality control during construction — that can help strengthen the resilience of the island’s overall transportation system.

Read more about the project here.

“Geoffrey has been a leader among his peers as a Ph.D. student at the Polytechnic University of Puerto Rico. His research efforts have been valuable to the success of our project investigating the damage from Hurricane Maria to transportation infrastructure,” they said. “Because of his hard work and accomplishments Geoffrey is deserving of this award, he is an excellent ambassador for the UTC Region II consortium.”