From the Director: NJ LTAP on the Move

Welcome to the first issue of 2016 for the New Jersey Local Technical Assistance Program e-newsletter! With the new year, we are pleased to announce that we will be offering some enhancements to our program in the coming months.

The first item of note is that we are going to be publishing a bi-annual hard copy newsletter that will have spring and fall issues. If you are interested in receiving the printed version of the newsletter (it will also be sent out electronically), please send an email to our program registrar with your name, organization, and postal mailing address.

We are also pleased to announce that several new LTAP courses are under development and will be ready to pilot over the summer and fall months. Among these will be some new safety and infrastructure management focused workshops.

Finally, we would like to remind our local agency clients that the LTAP program is available to provide technical assistance to you in the areas of Retroreflectivity (we have a retroreflectometer loan program for NJ public agencies), work zone safety, general infrastructure maintenance and safety questions, and can connect local agencies to their crash data. If we cannot provide the answers you are looking for, we will point in you the correct direction to an appropriate subject matter expert.

Don’t forget the annual Rutgers Paving Conference is in a new location this year and is on March 8th and the annual NJ Work Zone Safety Conference is scheduled for April 27th- registration is now open. We look forward to a seeing you all at our courses and conferences throughout the year. If there is something we can help you with, please reach out to our team!

The widened Francis Avenue Bridge in Spokane, WA, spans both the existing BNSF Railway tracks and a new freeway. It’s the first of several projects that comprise the southern 5 miles of the U.S. 395 North Spokane Corridor. Until recently, funding uncertainty delayed completion of the remaining projects, a problem thousands of similar projects across the country are facing. Photo: Courtesy Washington State Department of Transportation.

In February 2015, the U.S. Department of Transportation released a draft study called Beyond Traffic: Trends and Choices 2045. The study looks at the trends that are likely to affect the U.S. transportation system over the next three decades and the tough choices facing decision makers. The report’s main objective was to start asking some of the hard questions:

How will the transportation system accommodate a growing population and changing travel patterns? How can we reduce freight chokepoints that drive up the cost of owning a business? How can we knock down barriers to new technologies that promise to make travel safer and more convenient? How can we make infrastructure more resilient to catastrophic events like Hurricane Sandy? How will the Nation align decisions and dollars, and invest the trillions of dollars the transportation system needs in the smartest way possible?

Most important, the report asks what the transportation system will look like in 2045 if the United States does not modify its transportation policies and investment strategies to keep up with changing demographics and technological advances.

The short answer is that our transportation system will be woefully ill equipped to handle the demands of a growing population, improve our quality of life, and support the economy. The U.S. Census Bureau expects the Nation’s population to grow by about 70 million people by 2045 and freight volume to increase by 45 percent. And, if investment stays the same, the transportation system soon will become less reliable in terms of delivering goods and people. Already, the average driver in the United States wastes more than 40 hours in traffic every year, and that number could significantly increase in the years ahead. According to some estimates, by 2040, Americans will spend 10 times longer stuck in traffic. This not only means loss of time for commuters, but also loss of productivity, higher shipping costs for businesses, and slower economic growth.

Traveling around the country, I have been fortunate to see the discussions in Beyond Traffic play out in the real world–with real projects and real people. Along the way, I have seen some projects go to construction as planned, while others remain at a standstill. These experiences have underscored what’s working in transportation today. And what’s not. 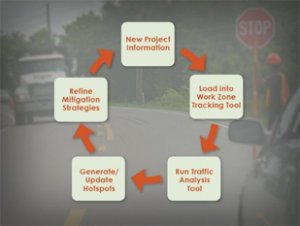 Many transportation departments use project coordination to minimize the work zone traffic impacts of projects in a corridor, network or region. It’s one of two smarter work zone strategies the Federal Highway Administration is promoting in the Every Day Counts third round.

Highway Worker Safety is a significant concern every day of the year. While new technologies and best practices are implemented every day to help protect workers, HealthDay has compiled a list of Safety Tips on how you can best protect yourself while working on the road. Whether its training new workers in proper procedures or ensuring all the workers on the site have the best protection and experience with the technology, these safety tips are something every worker should know. Check out the article on HealthDay.com.

In late October 2015, the USDOT released a report describing the assessments and their benefits. More than 1,500 people, including elected officials, field office leaders, and representatives from local, regional, state, federal, and nongovernmental agencies took part in the assessments. The assessments were intended to facilitate and encourage relationship building between people who work for different jurisdictions and who share responsibility for creating safer streets. This initiative was also intended to help USDOT promote assessments as an effective tool for improving pedestrian and bicycle safety.

USDOT has a long history of supporting on-the-ground assessments, ranging from formal pedestrian and bicycle road safety audits (RSAs), to neighborhood walkabouts, because such assessments can provide substantial benefits to all road users while improving safety. The report also highlights some of the ways that communities used the assessments to better understand and address some of the barriers and the resources that local communities and the USDOT can use, both at the physical and programmatic levels, to continue working to improve safe walking and bicycling throughout the Nation.

Read what Deputy Secretary Mendez wrote in the Fast Lane blog about the report’s release.

Find out more about pedestrian and bicycle RSAs on the FHWA website.

Read the full article in the FHWA Safety Compass.

U.S. Transportation Secretary Anthony Foxx, a former mayor of Charlotte, N.C., has plenty left to do in the Obama administration’s final year. His agency is pushing cities to improve bicycle and pedestrian safety, hosting a “Smart City” competition to showcase how technology can improve transportation, and doling out money from a new five-year, $305 billion federal transportation package.

But in recent weeks, Foxx added two more items that resonate with him personally to his packed agenda. First, he wants to tear down — or at least improve — transportation infrastructure that isolates communities. Second, he wants to find a way for cities to get federal transportation money directly, rather than have it flow almost exclusively through states.

If successful, Foxx would reverse decades of policy. Doing that by next January seems implausible, but he can at least plant the seeds for long-term change. Every community, he told mayors and transportation experts at the annual Transportation Research Board conference earlier this month, has examples of infrastructure that divided communities when they were built.

Several U.S. cities — with the help of the U.S. Department of Transportation — have already either torn down above-ground stretches of highways or are studying that possibility. The idea has gained appeal as local governments and transportation planners promote “complete streets” that accommodate a variety of uses and are particularly friendly for cyclists and pedestrians — not just cars. One of the most widely cited examples is San Francisco’s decision to tear down its Embarcadero Freeway that was damaged in the 1989 earthquake. The removal of the highway reconnected the city to its waterfront and spurred development. 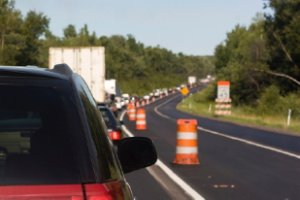 The seventh webinar in the EDC-3 smarter work zones series focused on project coordination tools to minimize travel delays and enhance safety for road users and workers. The December 2 event provided an overview of the upcoming Project Coordination Guide and examples of how agencies use online tools to collect and share data such as work zone location, duration and expected impact on traffic. View previous webinars in the series to learn about the technology application and project coordination approaches to smarter work zones.

Check out this and other installments in the Smarter Work Zones Webinar Series at https://www.workzonesafety.org/swz/webinars 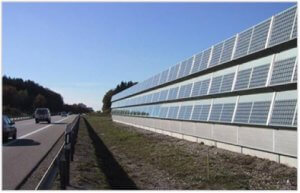 Photovoltaic system mounted on a noise barrier in Europe. It must be noted that in the United States, this type of installation would be limited by the AASHTO Roadside Design Guide. No structures of any sort are allowed to be placed on top of or directly behind guardrails or median barriers (unless the barrier is specifically designed to be crash-worthy). See FHWA Office of Infrastructure’s Clear Zone and Horizontal Clearance website for more information. Image courtesy www.photovoltaik.eu.

Renewable energy has been used in roadway applications for at least 60 years. In 1948, a portion of U.S. 97 was reconstructed to widen a bridge across a canal in Klamath Falls, Oregon. The bridge was connected to an intersection at a steep grade, presenting traffic safety issues during winter months. Transportation engineers incorporated a geothermal de-icing mechanism into the bridge design as an experiment. Based on results from the test, which observations substantiate to date, it has been estimated that the pavement would be sufficiently clear of snow and ice to provide free travel at a temperature as low as -10°F (-23°C). The exploration of geothermal roadway applications continued in the early 1980s when the Colorado Department of Highways (now the Colorado DOT) conducted a feasibility study to incorporate geothermal heating systems at critical locations in a proposed interstate. Results indicated that snow-cover duration on the roadways with installed heat pipes was significantly reduced as compared to unheated control areas. Since these early applications, geothermal systems, which are very site specific, have been installed in New Jersey, South Dakota, Wyoming, Virginia, Japan, Switzerland, and Argentina.

By comparison, generating renewable energy within highway ROW is an emerging concept in the United States. Much of the political and legislative effort for increasing renewable energy generation and use to date has focused on large-scale, centralized wind and solar developments, usually located far from the majority of energy consumers.19 Only recently has the focus turned to localized, small-scale applications, which can be sited near their end users. Currently, solar, wind, and biocrop growth/harvesting, or “bioenergy,” technologies offer the most immediate opportunities for generating renewable energy in the ROW. Other renewable energy opportunities, such as waste-to-energy conversion; hydrogen fuel generation from wind, solar, biomass, and waste resources; or energy harvesting via wave-, tidal-, and vibration-capturing technologies may serve important roles in the future.

Discover how FHWA and the Department of Transportation are developing cutting edge technologies to enable vehicles to communicate and respond to one another in a proactive manner by sharing speed, following distance, and accelerating/decelerating data. Learn how the Connected Automation technology works, watch the connected vehicles platoon successfully, demonstrate maneuvers, and envision a future where constant braking and stopping is a pain of the past.

At the Federal Highway Administration, we’re saying no to ‘stop and go.’ Check out the short video describing this exciting new technology here.