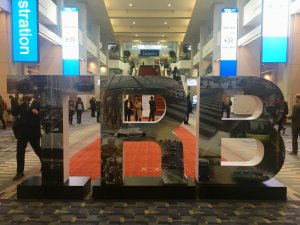 Transportation professionals from around the world came together last week to share research, discuss the future of the industry, network, and more. Among them, researchers from CAIT shared their own work ranging from autonomous vehicles and accessibility to preventing tunnel fires.

Nearly 14,000 people attended the 99th Annual Meeting of the Transportation Research Board last week at the Walter E. Washington Convention Center in Washington, D.C., setting a new record attendance according to the organization.

With a spotlight theme on “A Century of Progress: Foundation for the Future,” more than 5,000 presentations in nearly 800 sessions and workshops took place from January 12 to 16. The Rutgers Center for Advanced Infrastructure and Infrastructure (CAIT) and partners from the USDOT University Transportation Center (UTC) Region 2 Consortium were a part of many of them. Here is a rundown of some of our highlights from TRB. 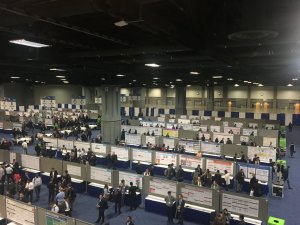 The Transportation Research Board Executive Committee awarded Dr. Cecilia Feeley, the Autism Project Manager at Rutgers CAIT, with the William W. Millar Award for best paper in the area of public transportation.

Some of Dr. Feeley’s other notable research was also featured in a lectern session titled “Making Autonomous Vehicles Accessible for All.”

As autonomous vehicle (AV) innovation continues to gain worldwide momentum and with it the potential for expanded mobility, it is important to consider how this technology can contribute to improved access for people with disabilities, who represent one in four U.S. adults, or over 60 million people.

To date, there has been limited research focused on investigating strategies for designing and deploying self-driving vehicles so they can best accommodate the often-diverse needs of persons living with one or more disabilities. 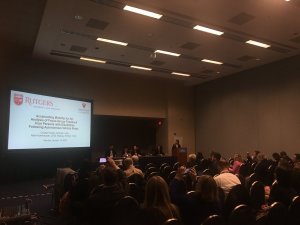 This paper discussed findings from a series of four autonomous shuttle rides followed by focus group sessions convened with adults with disabilities to document their direct experience as passengers during Princeton University’s 2019 SmartDrivingCar Summit.

Lukai Guo, a postdoctoral associate at Rutgers and a student of Dr. Hao Wang, an associate professor in the Department of Civil and Environmental Engineering and a CAIT-affiliated researcher, presented research on “Improving Airfield Pavement Condition/Rating and Corresponding Costs” in another lectern session.

Analyzing these indexes can result in more durable and sustainable airfield pavement in the long-term, and has the potential to help find improvements to the current practices in airfield-pavement management systems.

This work was also highlighted in a recent CAIT newsletter.

Noah Thibodeaux, a Ph.D. Student and Graduate Research Assistant at the New Jersey Institute of Technology (NJIT ), received the 2019 Student of the Year Award alongside his peers at the CUTC Annual Banquet at the beginning of the TRB Meeting.

Noah has also been involved in recent key UTC research with CAIT, which has focused on using rapid-repair materials to repair infrastructure without causing undue service delays and without having to completely shut down roadways, bridges, or tunnels.

The project was featured in CAIT’s newsletter this summer.

Researchers discussed different projects ranging from the potential use of NASA’s SMAP Freeze-Thaw Tool in assisting with seasonal load restrictions timing in the Northern United States, to a case study on monitoring truck surface deformation during a freeze-thaw cycle. 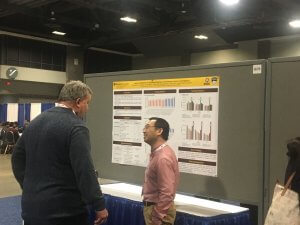 Some students from Rowan University presented during one of the poster sessions at TRB. Photo ©Ryan Stiesi

Researchers and students from Rowan University took part in many events, and a notable highlight came during the poster sessions. One project that students presented on during the session was titled, “Impact of Additives on Cracking Properties of Soft Binders Used in Cold Region.”

Cracking is one of the main distresses in asphalt pavement in cold regions. While soft asphalt binders are used in these regions, asphalt pavements can still exhibit premature cracking failures.

One of the approaches to solve this issue is to modify binders using additives. Historically, it is not clear what additives can significantly improve the cracking resistance of binders, especially at low temperatures.

Researchers from Rowan studied different additives that, based on the laboratory testing results, could be potential additives to create high performance binders for cold regions. 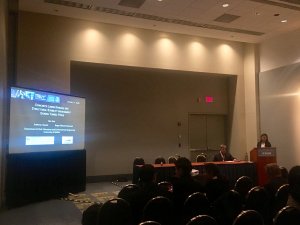 Researchers from the University at Buffalo presented some of their work. Photo ©Ryan Stiesi.

Researchers from the University at Buffalo participated in many sessions during TRB, including one presentation on some of their collaborative UTC work with CAIT. They discussed their UTC Fire in Tunnel Collaborative Project during a lectern session on “Advances in Tunneling and Underground Design and Construction.”

Currently only limited guidelines and code provisions on the structural safety of tunnels under fire exist. Major tunnel fires can lead to catastrophic events potentially resulting in the loss of lives, property damage, long service disruptions, and major socioeconomic impacts.

A collaborative UTC project between Region 2 Consortium partners The University at Buffalo, NJIT, Princeton University, and Rutgers aims to establish a framework to quantify fire damage to tunnel concrete lining considering soil-liner interaction. The outcome of this research can be used to design and assess new and existing tunnels for fire, and identify proper mitigation actions to minimize economic losses and meet the target performance level.